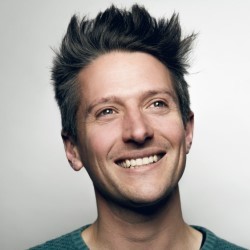 Though this is a lean hour of reliable standup, it's hard to avoid the feeling that it's lacking a little spice. End Of is a finely tuned, well-honed hour that has to work just a little too hard for its laughs.

This year marks Goldsmith's eighth solo Fringe show and his experience shows, delivering his material like a lean comedy machine on autopilot. That's not to say his performance is unnatural, though: he's a former circus artist and some of his funniest moments come in the pregnant pause between an offhand punchline and his physical flair that accompanies it.

His material here is tinged with purported weariness – he's had a child, he's in his 40s, and he's understandably feeling a tad tired. Nonetheless, e has a sprightly energy to him that belies his middle age, and the theme of the show, as he bounces about the stage telling us how jaded he's become. There's a rather contrived parallel drawn between Kung Fu and feminism, but mostly he waxes lyrical about the effect his firstborn has had on his life. Indeed, his candidness about the pressure to be a breadwinner and provide for the boy is actually refreshing.

Goldsmith is a safe pair of comedic hands, but there's a persistent sense that he could push himself further, and develop the ideas themselves rather than just seek out the cleanest way of delivering them. He's a polished act regardless, and has on this evidence earned his son's next few meals.