Euro-clowns fail to make a splash 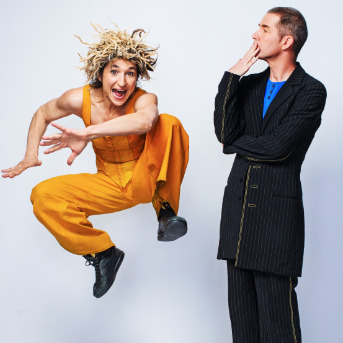 Swiss-German clown duo Ursus and Nadeschkin have an easy chemistry and childlike quality that, the odd swear word notwithstanding, might make them better suited to the kid's section of the Fringe brochure than the comedy. Introducing themselves by talking over each other at 100mph, they're well-meaning but perennially thwarting of each other's ambitions. Ursus cheerfully bangs his drums so loud that Nadeschkin's singing can't be heard, whereas his efforts to share the poetry of Goethe are foiled by her desire to make the spectacle more dangerously exciting.

There's a silly bit of business where both take turns to surprise the other by dictating a mime. But like most of their set pieces, it's so slow and contrived that it just doesn't justify the pay off. Even the one routine that really scores with the crowd, their pernickety tidying up of paintings by classic artists, a series of neat visual gags, finds Ursus imploring early on that a Swiss audience has usually clapped by now.

Whether something is lost in translation I'm not sure, as their style seems remarkably sanitised, with even Ursus's ultimate recital—customised with all the props placed on him by his partner—neither close to death-defying or so silly that it approaches absurdism. Without malevolent intent, only childish playfulness, there's no real nitty-gritty to their interaction, none of the sharp-elbowed drive or will to lift the roof off that would invest Synchronised Swimming with sufficient excitement to compensate for its lack of laughs.