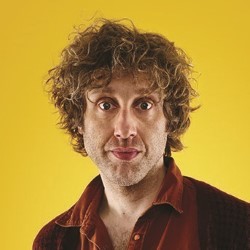 Richard Todd's one of those especially fearless performers prepared to risk failure even before his set has formally begun. As Fringe-goers contemplate giving his free show a chance, he prowls the venue trading in a neat line of apparently improvised self-deprecation. His defeatist attitude will emerge several times over the course of his 50 minutes, but no right-thinking act would self-flagellate so publicly unless they were assured of getting away with it.

Todd is yet to achieve his ambition of being a novelist, much less a successful one, and mines this disappointment for laughs, piling on the pathos with claims that his twin brother is now enjoying a relationship with his most recent ex. To fully buy into the man's frustrated, nihilistic disposition is to ignore the fact that he's clearly found his calling as a comic.

Constructing complex, bewilderingly intricate sentences from the far reaches of a vast vocabulary, he occasionally calls to mind a persecuted Daniel Kitson, or an intelligent Russell Brand. Ultimately though, Todd emerges as a talent entirely of his own. The left-field subject matter he tackles is rooted in the everyday, and we identify with him for all his wildly eccentric thoughts and behaviour.