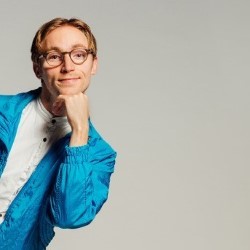 It’s probably not the most promising premise you’ve ever heard: a budding novelist reads excerpts from his unpublished oeuvre down in the Tron basement near midnight. But Rob Carter’s new creation turns out to be one of this year’s hidden treasures.

Resplendent in shell-suit jacket, sensible spectacles and slacks, Christopher Bliss has finally left his mother’s house in Shropshire and embarked on his first journey to, well, anywhere really. Hence his thrillers are as gritty as you might imagine, i.e. not very. Bliss is to crime what John Shuttleworth is to grime.

The main thrust is a spy story set in Las Vegas (“one of the biggest cities in the world!”) where the villain “eats lots of drugs”—cue ludicrous mime—on that famous Las Vegas, er, beach. Now, a Bond pastiche may not sound very original, but in the hands of a spectacularly naïve author who nevertheless performs it with bizarre over-confidence, it’s consistently, pant-wettingly funny.

The multi-talented Carter initially emerged as a musical comic, and now boasts Peep Show and Fresh Meat on his acting CV. He’s fabulously watchable here, and this is clearly a well-honed script, full of invention. Every line features some naïve gem, he’ll occasionally miss a page and spoil his own plot, and there’s a genuinely brilliant interactive take on Bond’s signature move.

It has this weekend audience in fits, notably a young woman at a table up front who’s so unexpectedly overcome by one particular gag that she spits her drink all over her companions.