A poignant love letter to the other Hamilton 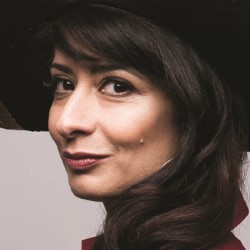 Tragic yet uplifting, Shappi Khorsandi’s love letter to Emma, Lady Hamilton in her new hour Mistress and Misfit is a subtle and touching hour of comedy from a standup who knows her craft inside and out. Much like all the men that seemed to cross her path during the 18th century, there is a genuine love and affection from Khorsandi for her chosen subject and no great deal of pity for a woman probably most famously known as Admiral Nelson’s mistress.

A woman disregarded by many on account of her perceived lack of virtue, Khorsandi seeks to find common ground with a woman who served as scullery maid, prostitute and muse. Paralleling her life with that of Emma, Khorsandi is able to look at the impossible standards and strictures that kept women ‘in their place’, and the emotional blackmail that imprisoned Emma for long periods of time. Something that Khorsandi herself has had to endure, not just as a comedian in a male-dominated landscape but in her romantic endeavours too.

Charming and heartfelt, Khorsandi candidly tells tales that her usual audience might find shocking – and a pretty impressive recitation of Stormzy’s ‘Shut Up’ that really didn’t catch the ear of the mostly over fifties crowd at this performance. They make for a refreshing show, however, about what it is to be a woman in today’s world, acknowledging that while it could be so much worse, it should be so much better.