The Harry and Chris Show 2 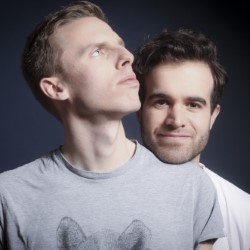 The Harry and Chris Show 2

It's not damning with faint praise to say that some shows sit perfectly in their mid-afternoon time slot. This sweet show is the perfect tonic for anyone wanting to escape the lunacy of the madcap Fringe, for it's a charming and uplifting hour of good tunes, sharp lyrics, and endearing performers.

Harry Baker is a performance poet and Chris Read is a jazz musician, and together they form a duet whose witty wordplay enlightens the soul. It's a stripped-back show, with just the two of them, a couple of microphones and a guitar. But what they also bring is their life-long friendship, which reveals itself in their instinctive interaction and unthreatening ribbing. Their songs take trivial ideas—such as imagining the life of a panda—and turn them into fizzing celebrations of language, leavened with laid-back tunes. So central is their friendship to their appeal that a song about a potential cause of conflict between them generates genuine gasps of concern from the audience.

A small piece of improv doesn't fly as it should, but this is the only misstep in a tight set that is impressive in its relaxed casualness. The final song offers a simple worldview that is uplifting in its honesty, just perfect for returning to the outside chaos.

They note that while this show is numbered '2', it's their first in the comedy section as they previously performed under the category of 'spoken word'. The audience reaction here suggests they've made the right move.