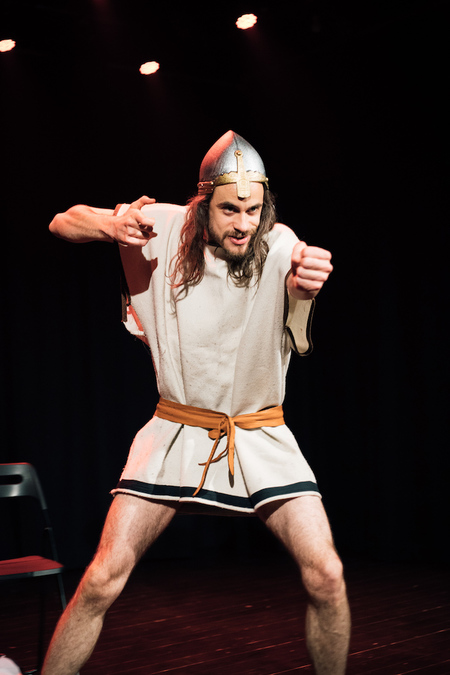 A strain of clowning that you might best define as mime with grunts, Viggo the Viking is the latest creation of goofily loveable Norwegian performer Viggo Venn. Sketching his audience on paper, inciting them to whistles, his early crowd work has a charm that falls somewhere between eager-to-please but touchingly naff magician and a child walking curiously through the woods, beckoning responses out of his audience with gentle coercion, mild flirtation and a sense of emerging community.

At first, the Viking character seems incidental, a nod to his homeland. Yet once he splits into two personae - a harmless adolescent who wouldn't hurt a fly and seems ill-suited to murder, rape and pillage, and his father, a typically bloodthirsty warrior, it starts to make more sense. Venn is superb at coaxing engagement out of his volunteers, with the added hilarity in this hour that he forces the most unlikely participants to subject him to extreme ultra-violence, his limber physicality hurling himself across the room.

Where he's less successful is keeping the narrative clear, with his instructions frequently too vague to be quickly intuited. Certainly, it's telling that he has to openly state “two characters” on a number of occasions, having eschewed any costume changes to make the distinction. Regardless, Venn uses his body as a tremendous storytelling tool, representing both his protagonists and the landscape they're charging about on. And rather wonderfully, he elicits impressively loud yelps of fear when his Viking chieftain on a kill-frenzy threatens an imaginary baby.