Review: Who's the Daddy Pig? 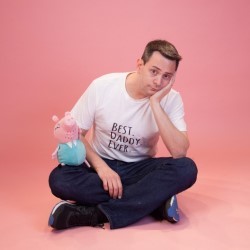 Who's the Daddy Pig

As we leave his show, Philip Simon hands out business cards proclaiming himself a comedian, writer and actor. Clearly he sees himself as a jack of all trades, and is looking to drum up some work off the back of this offering. And why not?

Who's the Daddy Pig? may be safe stuff, but it's perfectly suited to its midday slot and elevated by association with a globally popular kids entertainment franchise.

The gist is that despite having played the porcine patriarch in an official touring stage production of Peppa Pig, Simon nevertheless found himself unequipped for the challenges that came with sudden, unexpected parenthood. Cue a colourful dissection of his roles both on stage and off, and the hard facts he's learned about parenting.

Make no mistake, this is a cute, fun show, but its execution is terribly hack. While we might expect the performer to have a wealth of stories relating to his position of prestige in the eyes of thousands of children, most of the hour is devoted to pointing out the inconsistencies in the logic of the TV show. Peppa and her family are animals, but they themselves have a pet and have been known to visit the zoo. The pigs live in harmony among natural predators, and so on. If these facts haven't crossed your mind previously, Simon's show will be a revelation to you. Otherwise, you'll wonder why he's put a huge amount of time, money and effort behind stating the obvious for a month.