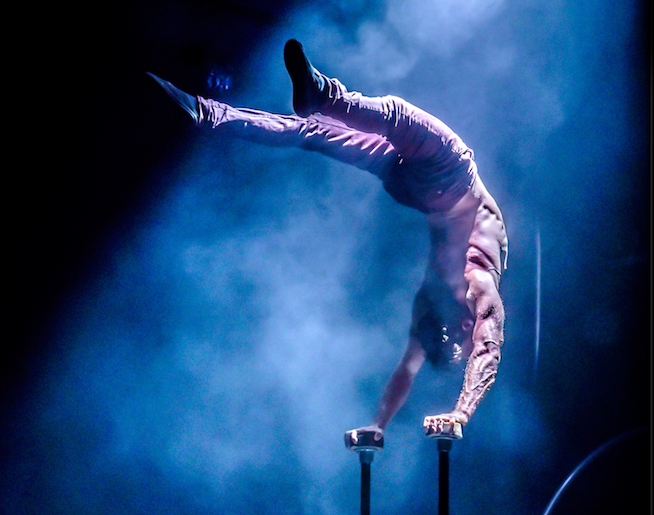 Circus has deservedly grown into a Fringe mainstay, a development especially gratifying during the 250th anniversary of the invention of this genre. This year’s productions range from crowd-wowing big top spectacles—such as Circolombia and Circus Abyssinia, both returning to Underbelly’s Circus Hub after success in 2017, plus the raucous UniverSoul Circus) to fairly intimate, questioning works like Company 2’s Sediment at Assembly Roxy, or experimental, autobiographical solos Egg and Notorious Strumpet & Dangerous Girl at Summerhall. It’s easy to feel spoiled for choice.

Barely Methodical Troupe burst onto the UK circus scene in 2014 with the award-winning male three-hander Bromance. In the follow-up, Kin, a kick-ass woman discombobulated a handful of young lads. Esmeralda Nikolajeff, the sole female in Shift (3 stars), is a chief asset of the company’s stripped-down and rather too laid-back new show. Strong and nimble, she seems up for and capable of just about anything. This could mean timbering down from someone's shoulders into a floor roll, treating the male cast members’ upper bodies like stepping stones or being thrown up backwards into the air with the total confidence that she’ll be caught.

Nikolajeff’s relationship with the men—strapping Louis Gift, the smaller and more flippant Charlie Wheeller, and the somewhat under-utilised breakdancer Elihu Vazquez—isn’t about teasing out any tensions within a gender binary. Nor is her attitude at all superior to the lads. She is instead, and rightly, on equal footing with them. The foursome generates an easy rapport both among themselves, and with us.

Shift is staged up-close on a diamond-shaped platform within a Spiegeltent, and features simple blue boiler suits for costuming. The show’s basic shortcoming is that it doesn’t have quite a strong enough creative engine. If a key motive was to find and explore the possibilities of physical expression using (body-sized) rubber bands, as the quartet does, this viable concept isn’t well enough sustained. And there are missteps: a desultory bit of storytelling-with-motion, and a puzzling, pointless episode in which Nikolajeff distributes large rubber bands to the audience and then nothing happens. Compensation includes the graceful speed of the aptly-named Wheeller’s climactic Cyr wheel routine, and any passages when the performers demonstrate their considerable corporeal virtuosity.

There’s virtuosity to spare in Réversible (4 stars), but also an emotional core. The show was directed by Gypsy Snider for the Montreal-based Les 7 Doigts, aka The 7 Fingers. Plenty of other productions have featured boundlessly energetic, attractive young artistes. Indeed, some were devised by this same company. What gives Réversible an extra lift is the nine-strong cast’s calibre of skills, their individual personalities, and the work’s creative grounding in stories from the company members’ familial past. We don’t hear any of their tales in great detail or depth. Rather, a stream of brief utterances from each performer top and tail the show’s 70-minute running time. But it’s sufficient to draw us in and, by the end, touch us too.

The gifted people onstage are framed by three free-standing, wheeled walls that can be configured in many ways. The opening movement section, with the ensemble scooting through and about these walls, seems frantic and overfamiliar. Things settle down, however, in a most winning fashion. The highlight is an unusual, and exquisite, male-female Chinese pole duet. But there are no disappointing acts and, consequently, much pleasure to be had. That includes the finale, a heavenly romp in billowing, cloud-like folds of parachute silk. It’s a lovely way to bring this open-hearted performance to a close.

Originally conceived as an open-air performance, Gandini Juggling’s 8 Songs (3 stars) works well indoors. The premise is simple: a cast of six (some of whom are not, refreshingly, fresh-faced kids) juggle their way through some clever, sometimes complex and mostly satisfying patterns choreographed to rock-pop classics by the likes of Bowie, Dylan and the Stones. Often the lyrics are repeated aloud by the performers, and accompanied by different moves. Much of this works a treat, but even good bits are overextended. By the end things spin into deliberate but unappetising chaos, like a jugglers’ karaoke crossed with a silent disco. Still, there’s no gainsaying the appeal of watching a mature man spin a basketball on his fingertip to Janis Joplin’s rendition of ‘Summertime,’ or the simple, buoyant sweetness of the Velvet Underground’s ‘Sunday Morning’ used as a Gandini springboard.

As genial, hunky compere Cal Harris informs us at the start of Circus-Cision (4 stars), a giddy little hour of circus/cabaret organised by Head First Acrobats, "the title was cooked up to peg acts that ‘made the cut'". And good fun it is too, especially if variety is what you crave. Harris and Thomas Gorham do a naughty-silly balancing routine dressed up in Game of Thrones-style garb. Garry Starr, aka Damien Warren Smith, plays with various theatrical genres while dressed in ruffed collar and tights (but minus a codpiece). Strands of spaghetti are used a la Lady and the Tramp to deal with romance. Even better is the surreal slapstick moment when the stage is occupied by a handful of audience members battering each other’s bottoms with soft, fat tubes. Kali Retallack has an elegant, sensual ring routine, Chelsea Angell makes the most of her hula hoops, and cheeky Rowan Thomas strips inside a Cyr wheel. Best of all is The Amazing Mr Fish, a smart goofball who’s an absolute dab hand at getting audience members to do outlandish things for him.