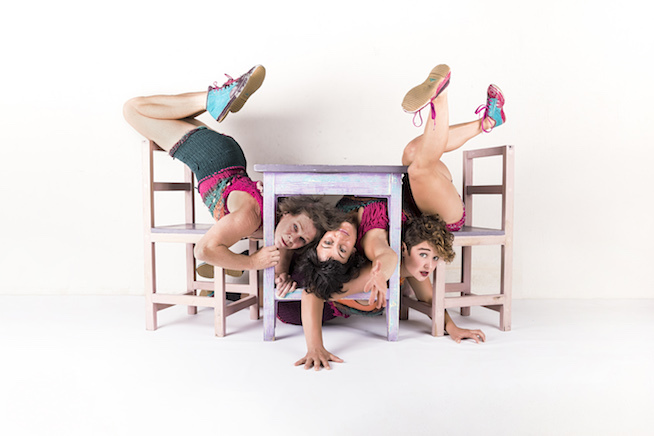 "Two’s company and three’s a crowd" is generally considered a pejorative, but not in terms of live performance. If anything, having three rather than two people in a show tends to up the ante in terms of theatrical possibilities.

That’s certainly the case with Casting Off (4 stars), an unpretentious and thoroughly engaging serving of intergenerational feminist circus that’s deservedly shortlisted for a Total Theatre Award. The USP of this beautifully-judged Australian production is the casting of three female performers whose ages range from 29 to 58. Debra Batton is the chattiest, wisest and eldest performer, and Spenser Inwood the youngest, sturdiest, most impatient and yet seemingly the most practical. At 41, Sharon Gruenert nimbly occupies the the bridging middle spot. Clad in hand-knitted motley, these characterful women talk—and sometimes argue, but not without affection—their way through a show that is a delightful mix of skills, derring-do and spoken text. There is no soundtrack save for what issues forth from their own mouths and throats. Their well-delivered conversation and comments are interesting and funny enough to almost distract us from just how adroit and strong they are physically.

A Good Catch, as their company is called, is one to keep tabs on. They use the Spiegeltent in an unfussy, disarmingly open manner. It feels domestic but without the loss of showbiz savvy. Clearly these women bear a lot of responsibility. Collectively they list all the things they do, or need to do. And if occasionally one of them becomes a little overemotional, they can still share a laugh. They also keep busy building and climbing atop a tower of chairs and a table, executing a terrific hand-to-hand routine on a trapeze, tumbling and, yes, catching each other. Their work is charming, funny, involving, inspiring and modestly magnificent.

The French Institute’s new headquarters smack in the centre of town renders access to its select roster of shows and events much easier than was previously the case. Physical theatre dominates the programme but there is one neat slice of dance. Moonlighting from Scottish Ballet, which he joined as a dancer in 2013, Constant Vigier has concocted (Mes)dames (3 stars) ostensibly as an examination of womanhood and gender equality.

Reaching for such lofty themes might well seem apt when Vigier’s pop-ballet is danced by more experienced colleagues from his home company (as is said to be the case on weekends). The work has slightly different implications, however, when performed by the trio of youthful and apparently recent dance graduates that I see mid-week. Lisa Elton, Nicola Scholefield and Daisy Mullen-Thomson radiate both schoolgirl freshness and stylish confidence as they dance on pointe to tracks by Christine and the Queens and Perfume Genius. Vigier sets up a series of scenes in which these young women gradually seem to grow up before our eyes. Initially playing skipping games, they’re soon acting like each other’s fashion police. This smartly-crafted half-hour of dance may not be profound, but it is an unexpected and deft treat.

Every year the Fringe is littered with dance-based shows you want to like more. The talented, Hong Kong-born Joseph Lee’s Folding Echoes (2 stars) is an example. His questioning solo promises to be a playful rule-breaker and, indeed, Lee does thwart some of our expectations. First he gives out long-time-no-see greetings and hugs as we enter the studio. Mid-performance he begins running on and off stage, sometimes toting a white chair and sometimes also in the dark. At one point he even crawls back on through our tiered seating area.

Lee’s attempt to subvert theatrical conventions is laudable, or at least superficially amusing. But despite the clever, frisky performance tricks and post-modern theatre games, not to mention his stage presence and kinetic ability, the show doesn’t connect. It’s not incisive or deep enough. It’s as if Lee doesn’t quite know how to draw us in and keep us on side. Early on he makes heart-shaped gestures with his hands, or alternatively places a hand on his throat; such simple, open-to-interpretation actions are identified as either love or hate. So far, so interestingly ambiguous. But twice Lee loses attention in a big way. The first time is when coloured lights flash on the chair, which Lee has set centrestage, while he balances on the balls of his feet. This lasts for the duration of a French pop song. Then, at the very end, his desire to communicate with us is hindered both by loud music and a microphone stand that’s missing its mic. Lee bolts for the nearest exit. While I don't exactly do likewise, I have to chalk up Folding Echoes as a minor puzzlement.

Akram Khan, one of the biggest names on the UK dance scene, has stated that Xenos (4 stars) is his swansong as a performer of his own full-length work. No need for tears just yet, given that Khan will be dancing the piece globally until 2020. Presented in the International Festival, this monumentally-scaled solo was created not just in recognition of the Indians who lost their lives in World War One but also as a cri de coeur against the horrors of war generally. Playing a kind of Indian Everysoldier, Khan’s sensitive characterisation enhances his detailed, often whirlwind and altogether still hugely impressive movement. His tremendously giving, committed performance is anything but generalised. Featuring superb live music by composer Vincenzo Lamagna, plus a couple of coups de theatre, the show itself is impressive if also, in truth, not as moving as it might mean to be.