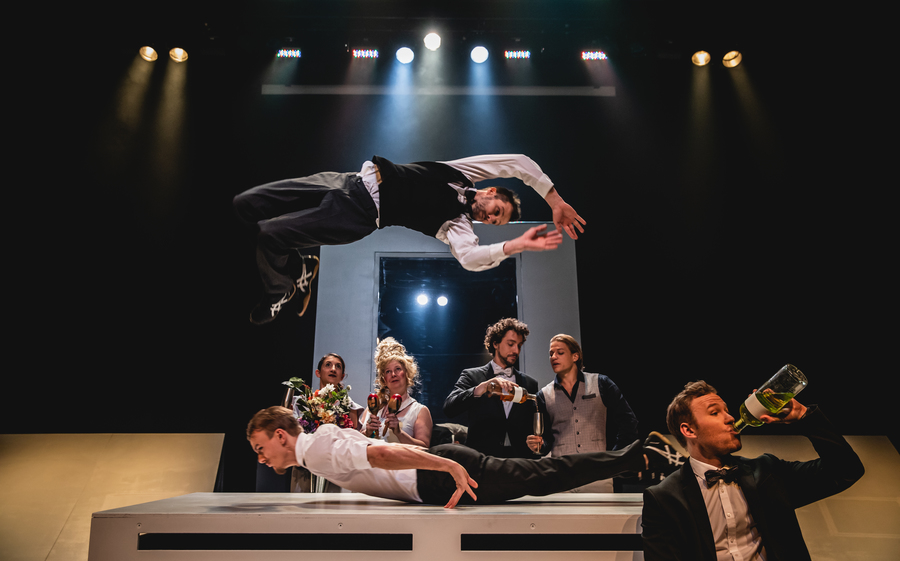 Quebec circus means much more than Cirque du Soleil, as this fresh-as-paint show is here to remind us. It's the clever, occasionally manic brainchild of Machine de Cirque, a company founded in 2013. This light-hearted, high-concept production neatly skewers art world pretensions while showcasing the accomplished and mainly acrobatic skills of a cast of eight (six men and two women, and one of the latter is a musician and vocalist).

This likable bunch of mischievous eccentrics happily play at being poseurs in a setting that goes increasingly topsy-turvy. Auctions, cordoned-off queues and racuous opening night parties get a circus makeover complete with somersaults, head-to-head balances, the liberal use of a springboard and a plethora of juggling clubs plucked off plinths. Things take an ever more surreal and baroque turn after the lone female acrobat gouges a hole in a canvas, literally entering the universe of a painting. Ultimately—and with the assistance of a moustachioed male counterpart who happens to have a comic addiction to popcorn—she herself becomes a sort of human canvas, a feat which ends the show almost on a note of apotheosis.

The director, Olivier Lépine, knows how to orchestrate chaos. The ensemble seems very much at his disposal, entering into the show's reckless spirit with attractive abandon. If it isn't too much of an oxymoron to put it this way, the whole thing sometimes meanders a bit – albeit usually briskly, and with a guaranteed degree of zest. What's the most apt word for La Galerie? Enjoyable.