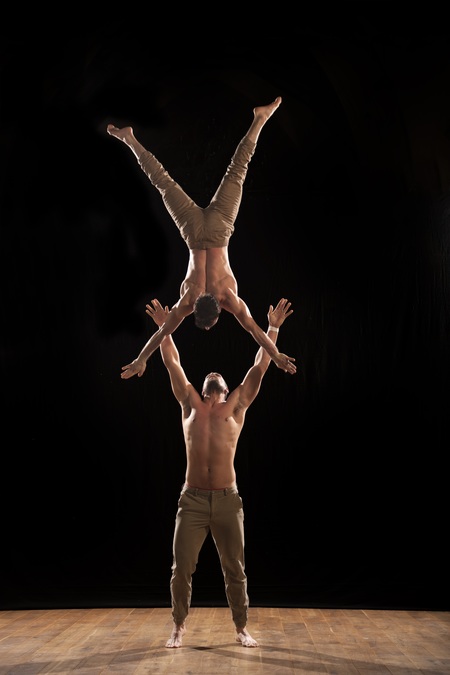 Barely Methodical Troupe's Bromance first opened at the Fringe in 2014, winning them the Total Theatre Award for circus, but this exploration of friendships between men and how they are expressed is still relevant five years on. It starts with an explanation of the handshake the three performers and co-creators, Beren D'Amico, Louis Gift and Charlie Wheeler, are comfortable with.

When it comes to more emotional expression, they're not as comfortable. The circus skills spring out of these handshakes, back slaps, hugs and trust falls, mixing acrobatics and hand-to-hand with b-boy and contemporary dance elements.

Circus is the perfect medium to explore the competitive edge to many male friendships. Wheeler in particular competes with D'Amico desperately seeking the connection and trust shared between his two co-performers.

The Cyr wheel becomes a symbol of emotional openness. Feeling left out by the other two, Wheeler performs a fluid, and mesmerising solo towards the final third of the show, becoming a catalyst for the three men to become closer, less "bro-ish" in their relationship to each other.

The three interweave their physical performances with some comedy, both talking to the audience, and visual gags. They play up, too, flashing abs to the audience to great cheers. In the final, showstopping routine they perform trick after trick in only their shorts, but it is the talent and vulnerability in the performance that has made this show such a success.