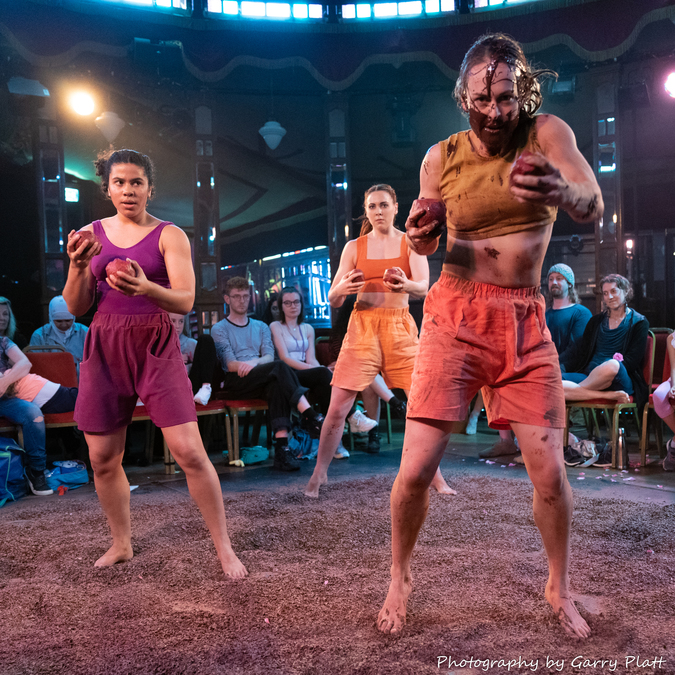 The intimate, jewel-like Bijou—a small Spiegeltent that is a part of George Street's Assembly Rooms—is ideal. The audience sits on all sides, two or three rows deep. This is sensory dance and, significantly, music theatre that looks you in the eye, lures you onto your feet and feeds you a morsel of the titular treat. And, depending on where you're seated, it might even spoonfeed you or pour something bittersweet down your throat.

Initially an agreeable, knowing cast of five—three women and two male musicians—loop and swirl about, all smiles. They get us to sway about and dance with each other too. Soon enough, however, and for reasons never made explicit, a couple begins a full-bodied, gestural argument. This overextended, deliberately exaggerated falling-out may be fairly unconvincing and physically limited, but it induces the others in the ensemble to use chocolate to soothe their colleagues' flaring tempers. We are again drawn into the ensuing action, a fun, clever and messy ceremonial enactment of communal enjoyment and unexpected mourning. A symbolic burial and rebirth takes place, enhanced by a liberal distribution of cacao. The climax, meanwhile, is a pagan-style dance that could, in truth, be pushed to wilder extremes. Nevetheless Chocolate is divertingly light and sparky entertainment with the bonus of a live original soundtrack.