A mesmerising dance with light in need of tighter storytelling. 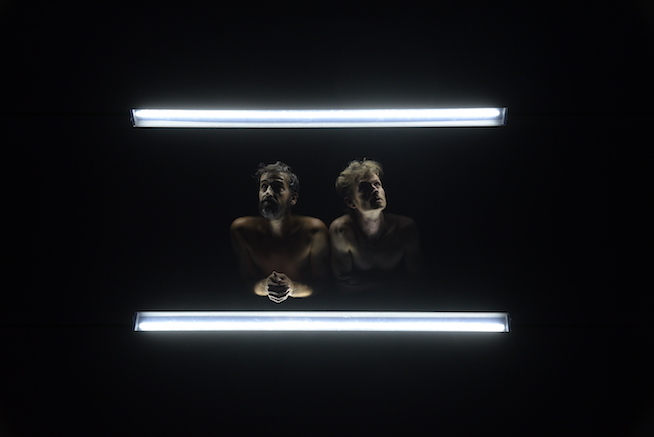 Behind two fluorescent bars of white light, rules of gravity don’t seem to apply. Two bodies (Mickaël Henrotay-Delaunay and Ismael Oiartzabal) float and twist, their limbs gliding in and out of the shadows.

The men play-fight. Skin sinewy and strong, their white bodies dip through a pitch black box. Arms and legs seem cut off from their torsos, free-floating in the darkness. Reaching into the light, the effect is astonishing. They build from abstract (“Is that all they’re going to do for the whole thing?” a child behind me whispers as walls of flesh wriggle) to concrete bodies (“Woah”). When they punch a hand over and over, it’s like a ripple in dark water.

While Philippe Saire’s choreography is stunning, the story makes little sense. A mesh-clad hand appears. A ghost? Putting their newfound fighting skills to the test, they throw off the metallic man, followed by a floating sea monster. With their over the top kitsch, these villains detract from the elegant style of the show. The fractured editing of Edvard Grieg’s 'Peer Gynt Suites' furthers this lack of cohesion.

Hocus Pocus needs clearer explanation if it's to keep the kids from fidgeting. The conceptual approach, while mesmerising to look at, loses some of the children. There’s a very vague message to keep fighting until you’re through the darkness, but the silly moments are taken so seriously that the truly serious moments carry less weight. It’s a gorgeous piece of art in need of tighter storytelling.