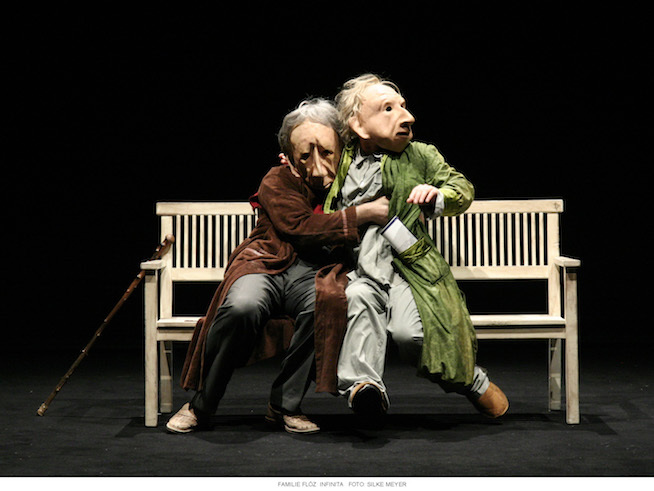 The four performers of Infinita are undoubtably masters of character mask work. They keep their sensitively sculpted papier-maché identities expertly animated through responsive clowning and subtly acrobatic movement, as they take us from nursery to nursing home and back, drawing parallels between the dependency experienced at each end of a long life. The heightened physicality of a just-ambulatory toddler contrasts with the stillness of aged muscles in the German company's very human portrayals.

We see phases of an old man's life, from meeting his wife in kindergarten to mourning at her grave, established through live action and clever black and white sillhoette projections. A rejuvenating love of music is the key to his memories, cleverly integrated with the live action for some scenes, though forgotten elsewhere. Sombrely coloured housefronts that flank the stage transform into a piano, or an oversized table and chair that allow for an effective shift in scale.

The tone is sentimental from the start, interspersed with excellent comedy scenes from both pre-schoolers and care home residents. Periods between are, however, rather dull once you've done admiring the cast's technical abilities, and there is no emotional punch to pay off the drawn out sentimentality. A harried and under-resourced nurse hints at the desperate reality of the care home industry, but any bubbling politics is left unexamined. Some fun gimmicks with a large ball jolt us to attention midway through, but a 90-minute running time feels too long.