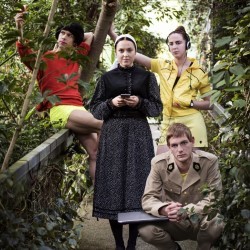 Forget, or toss aside, any ideas you might have about colonialism, the purported thematic impetus for Pink Mama Theatre’s Jungle, and instead surrender to the pointed wackiness, the fruity passion, the satiated ecstasy and underlying pain of what may well turn out to be one of the sharpest, strangest and most sensual dance-theatre productions on this year’s Fringe.

Polish choreographer Sławek Bendrat is, along with Dominik Krawiecki, this Swiss company's artistic director. He certainly puts his sensationally good cast through their paces, plunging them into patterns of staggeringly rhythmic, gestural and repetitive motion often set to a driving beat and punctuated by fragments of spoken text. A handout pegs the borderline cartoon characters — embodied by Charlotte Mclean, Valentin Markus Oppermann (also responsible for the infectiously heady music), Izabela Orzelowska and, in a tour de force performance, Tomek Pomersbach — as, respectively, a British feminist, a traumatised American soldier, a lost missionary (presumably so lost she may be of unknown origin) and a Venezuelan transwoman.

Edinburgh, it turns out, is only seeing half of this gob-smacking steamroller of a production. That may be why the female characters seem to be given short shrift compared to the men. Never mind. Even cut down to 40 or so minutes the show works a treat. Its dramatic and creative watchwords might be confession, violation and exaggeration. The bizarre, WTF beauty and kick of Jungle is predicated upon trusting that Bendrat and company know exactly what they’re doing even if you don’t quite know what’s going on, or being done to you. One to revel in.