Review: My Land by Recirquel 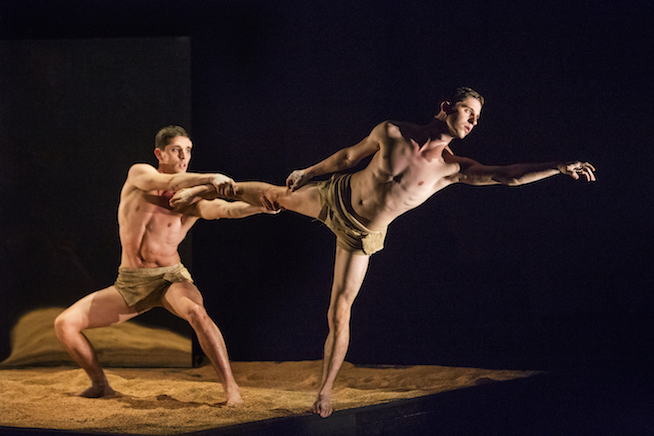 For millennia, land has been a source of conflict. Desirable but impossible to truly possess. Vied for and revered by men. Women have had much the same treatment, so it seems apt that a woman embodies the metaphorical earth goddess role in this stunning new production from Recirquel, premiering at this year's Fringe. Dirt slips through fingertips and the woman slips enticingly out of reach, while six men push themselves to physical and emotional limits to claim something that will always resist ownership.

Directed by Bence Vági, whose company brought us last year's hit Paris de Nuit, this show has an entirely different atmosphere and a cast of extraordinarily high technical calibre. Beautiful and inventive scenography includes a warping mirror that creates mirage illusions, and Zsolt Tárnok's "earth table" stage, which shoots shafts of light from beneath a layer of soil as it is scraped and swirled away by the choreography above. Lighting—by Attila Lenzsér and József Pető—is dramatically atmospheric throughout: entrances and exits dissolve through a black void, sharp silhouettes stand out against haze, shadows on bare skin highlight intricacies of musculature.

Roman Khafizov bends himself backward till his fingertips touch his heels, Yevheniia Obolonina balancing a handstand on his upturned hips. Rodion Drahun and Sergii Materinskyi face off in a powerful battle manifested through startlingly intense juggling. Later, Materinskyi dances an acrobatic deathwish with his balance ladder.

In the end, we are reminded that, for all the fight that fills our lives, we each inevitably return to that dust, that earth, that land.