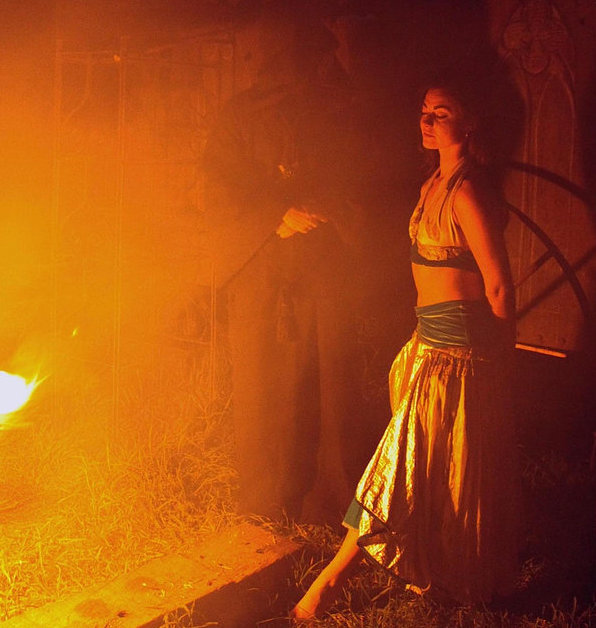 Walk down the Cowgate this evening, past St Patrick's church and you may glimpse a spectacle: a 40 foot-high set evoking the Cathedral of Notre Dame; big, beautiful (real!) horses hanging out amid the trees; a goat, gambolling backstage. Pass during the performance and you will see no elecric lights, only fire. You may hear the clanging of bells, the clatter of a horse-drawn carriage, or the mournful sound of a full pipe organ mounted high on one of the spires. It's even more spectacular from inside.

Having been transported, set, man and beast, all the way from France, this is evidently a mammoth lo-fi undertaking. Running at two and a half hours, outdoors, it's also decidedly un-Fringey – and that's even more so in terms of dramaturgy. Expansive, digressive and often opaque, this retelling of Victor Hugo's novel sits firmly outside of modern theatrical trends. But it stays true to the novel, making the cathedral and its gargoyles a central character and imbuing it with the capacity to determine emotions and fates, offering both sanctuary to the needy and allowing archdeacon Frollo to practice alchemy and all manner of abuse behind closed doors, away from regulating transparency.

Sure, it drags in places. The horses aren't always required, though they do add spectacle. But there's some nice dramatic touches – Esmerelda, for instance, is the only character who speaks no English. Played by a British Iranian actor her comparative voicelessness is tragic and telling. But the fire—a terrifying amount of it at times—makes for something entirely unique, reaching back in time and bringing forth this odd, medieval spectacle.