With clumsy clowning, a performer's mask skips to show the real emotion hiding underneath. 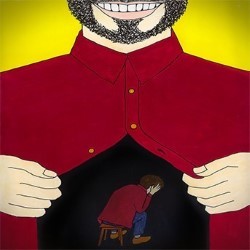 Wild grins wilt. Ramon Ayres and Rob Evison attempt to demonstrate the mental strain of performance in Offstage, be it on a velvet rimmed stage or just in front of a friend. Thought it’s perfectly timed for a festival where conversations have already turned to mental health and wellbeing, the slack narrative and clumsy clowning distract from the message they’re trying to share.

Spinning a mounted wooden platform, the duo leap on and offstage. Grabbing inexplicable costumes and props for their frankly baffing performance, the recorded audience roars. The real laughter is muted when we see snippets of their show, the physical theatre gawky and stiff. For a performance that is almost entirely non-verbal, their actions don’t create a slick enough—or funny enough—duet.

The lack of laughter their onstage personas receive weakens the impact when the tone shifts. When Pedro (Ayres) is infused with sadness to the point that he can’t perform, Harley (Evison) takes his place, using increasingly wacky masks to hide his partner's absence. Sweetly melancholic moments come with a kiss on the cheek with a party popper and a heartfelt sequence as Harley physically restrains Pedro from leaving our stage, but by then the meta-narrative is so unclear it has lost its impact. The music blurs the tone further as it underscores the action with strangely lift-like guitar music, spiked with discordant tones as the performer’s frown deepens.

Offstage desperately tries to show the struggles of performance, and raises money for a worthy charity, but in practice it lacks the necessary complex, multi-layered presentation of mental health.