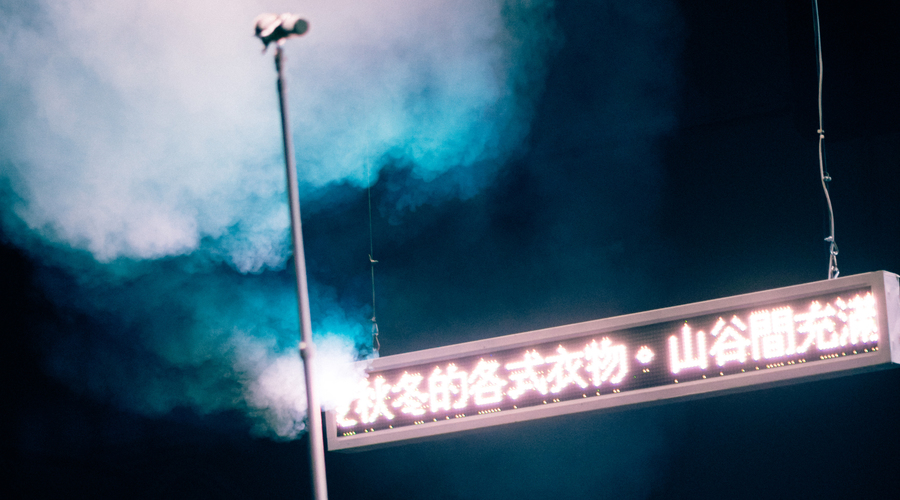 The set is being assembled when the audience enters the dance studio – it takes about five more minutes. Monster literally begins as a work in progress.

As Yen-Cheng Liu’s voice blares out from the horn loudspeakers, a haze descends over the stage. The masked figure of Yu-Fan Liu holds a microphone to a radio and Gloria Gaynor chimes out. It’s a confusing deluge of thought, a mandate to survive that repeatedly disappears and re-emerges.

Monster proceeds without the need to rush or the pressure to follow a prescribed narrative. Yen-Cheng’s movement has a fluid—almost lackadaisical—nonchalance that slowly morphs with lithe purpose. But it doesn't match the pace of Yen-Cheng’s sound design, which works the Monster soundscape into a frenzy.

All the while, Yu-Fan sits motionless in the background. As Yen-Cheng attempts animality with a mystery wrapped sphere, the masked presence mimics the audience – a creative voyeur unable to pierce Monster’s conceptual bubble. There are intermittent glimpses buoyed by Jui-Hsuan Tseng’s lighting design, as the mystery sphere becomes a glitter ball and reflects brilliance around the studio. And as Yen-Cheng slowly sheds his costume, there is a snippet where the audience can intimately engage with the performer. But these connections are few and far between.

Monster’s inconclusive ending is a brave creative choice, one that keeps the audience surmising long after leaving. Is frustration the best emotion to end this confusing show? At least it evokes feeling, which is too often lacking throughout the production.