Review: Void by V/DA and MHz

Powerful multimedia dance-theatre disturbs the senses and the status quo. 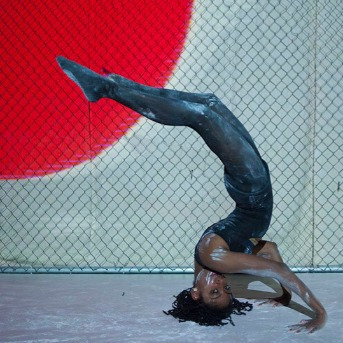 In a non-place, behind an anonymous roadside hoarding, Mele Broomes twitches her fingers and flexes her limbs, awakening into a purgatory of static sounds and flashing grids of interference. The show is a multimedia re-imagining of J.G. Ballard's novel Concrete Island and, after two years in development, has arrived on the scene to be immediately shortlisted for this year's Total Theatre Award for Dance.

A surround sound effect situates us between the passing traffic of unseen motorways, and descends into a surging crackle of error codes and disconnected signals. Projected visuals against a high mesh fence reinforce this technological no mans land in scrolling shards of acid yellow and neon purple, black and white. The costume design adds further distortion and the effect is a disorientating optical illusion as projected matrices cross Broomes' skin.

A deeper politic is foregrounded when the accompanying sound shifts temporarily to a slavery song, reframing the existential struggle of invisibility and fight alongside Broomes' blackness. The show's concept has been developed in consultation with Ashanti Harris and Adura Onashile, and moves Broomes' character through phases of desperation, resignation and focusless anger in bursts of broken-bodied choreography, as she learns to exist in this perpetual non-life. She contorts up the links of fence, becomes an amorphous pulsating blob, or hammers her high heels against the unyielding barrier, the sound amplified and reverberating around the space.

Void is an inescapably powerful piece of work, both in its message and its sense-jangling form.