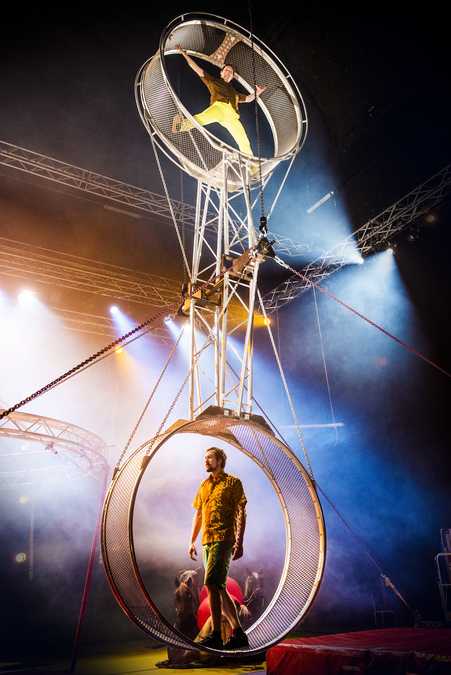 Surrendering to this big, racuous all-male circus show from Finland's Race Horse Company is easy. Those who devised and perform in it have got the balance between testosterone and tongue-in-cheek just right. You kind of know to expect the unexpected from the get-go as the six-member cast enter on horseback, only the horses are legless costumes and the guys tucked inside and moving about on their knees. It's ridiculously funny, a tone that permeates an hour-long performance that doesn't have a theme but, instead, seems to be operating from some sort of quintessentially male collective impulse. Deceptively and un-selfconsciously sloppy but often recklessly inventive, the cast come across like overgrown boys keen to try out their wildest and most stupid-smart dreams. They are essentially very rock 'n' roll.

The production's set-pieces keep getting better and better as the levels of adrenaline onstage mount. A long-haired fellow wields a sledgehammer, breifly sending another bloke in a bear suit skyrocketing. A teeterboard routine is succeeded by another featuring a brace of huge trampolines. Watching the performers vaulting between the two pieces of equipment is a kick. There's a great catapult stunt focussed upon a skinny man in a scanty leather outfit. A springboard, aka a Russian bar, doubles blasphemously as a crucifix for a long-haired Jesus Christ substitute.

It all culminates in a double wheel of death act that has overtones of a mock-religious ritual. It is, at the same time, a thing of almost poetic beauty. In short, Super Sunday is a treat.