They grew up in village on the coast of Kenya, travelled together to Nairobi to learn their art, and have since performed for the Pope. Evan Beswick talks to The Black Blues Brothers, a group of acrobats tumbling into Edinburgh for the first time 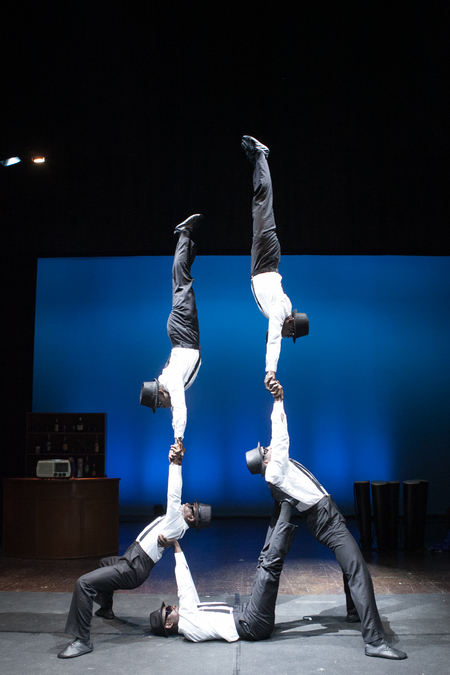 To mark a few points.

First, let's get this right: I'm in Venice, to watch a group of five Kenyan acrobats perform to music from the American classic The Blues Brothers in advance of their Edinburgh run. We're met by Alessandro Serena, artistic director of Circo e dintorni, the Italian company bringing The Black Blues Brothers to Edinburgh. He's from an old and illustrious circus family – his grandmother was film star, trapeze artist, acrobat, elephant trainer Moira Orfei.

He's a producer and academic, and it would be entirely accurate to describe his knowledge of the history of circus as encyclopaedic. He is, indeed, the editor of the circus section of the Dictionary of 20th Century Performing Arts. Most charmingly, though, he's unable to tell me exactly where he's from. "I grew up in the circus," he laughs.

Second: Venice is an extraordinary, beautiful place. It's hardly an original observation, but when expecting a touristic ordeal, the existence of quiet piazzas, the solace of narrow canals, the absence of engine noise, the outlandishness of a city built on 1000-year-old wooden pilings in the silt, all come as a delightful shock. It is also extraordinarily hot.

It's 35 degrees this weekend, which, aside from meaning the local favorite, Aperol Spritz, becomes practically a first aid essential, also means that physical exertion is right out. The sight that evening, then, of the five acrobats executing three-level balances, handspringing over tables and, most spectacularly, tumbling from height in suit and tie is, frankly, exhausting. And exhilarating. The muscle and the sweat comes as a sweltering reminder that the physicality of circus is the real deal. "It's hard to jump in a suit," explains the troupe's flyer, Seif Mohamed Mlevi. "But now, after a lot of practice, I can do anything in a suit!"

Over breakfast the next morning I sit down with the team: Ali Salim Mwakasidi, Bilal Musa Huka, Hamisi Ali Pati, Rashid Amini Kulembwa and Seif Mohamed Mlevi. We're in Novento di Piave outside of Venice. It's their home while working, between stints back in Kenya, and also the base of Karakasa Il Laboratorio delle Meraviglie – the performing arts school where they now all teach circus.

In some ways, the Blues Brothers theme is a bit of a red herring. Indeed Serena, who devised the concept with them, is careful not to place too much emphasis on it. It's intriguing, he explains, because of the origins of the blues as a black art form, co-opted (in homage) by John Belushi and Dan Ackroyd, and now revived by five lads from Nairobi. But, the toe-tapping beats of songs like 'Everybody Needs Somebody to Love' and 'Let There Be Drums' are sweet and meet for high energy acrobatics – and he's not wrong. It's helped by the fact that, after about 600 performances now, it's slick as anything.

In another sense, though, the characterisation is spot on. If Jake and Elwood are too cool for school, these guys are—both in character as well as in person—unmistakably insouciant. "We had to learn how to dance in that style," recalls Mlevi, casually mimicking the lame dad moves perfected by Belushi and Ackroyd. "It's not easy!". This cool restraint is all the more surprising given the journey they've been on. Born in Nairobi they trained together at Sarakasi, a project started by a UN officer to expand opportunities for kids in Kenya to become involved in performing arts.

Bilal Musa Huka explains: "We come from the same village, so we were friends before. There were some guys doing acrobatics when we were very young. They inspired us to do acrobatics and we saw them and started to do. Then after some years we travelled from Mombasa to Nairobi because at Nairobi there is a very big school called Sarakasi. It's a social school – some of the acrobats they come from slums."

Spotted by Serena on a scouting trip, they began working as professional acrobats in Italy four years ago, training and performing for a proportion of the year and returning home to family for the rest. In a turn of events which seems both outlandish, and predictably Italian, they were asked to perform for the Pope. Though all five are Muslim they leapt at the chance. "Wow! It was a great pleasure. They were proud of us, even in Kenya!" says Huka.

I'm curious as to whether the concept, The Black Blues Brothers, feels at all uncomfortable. As a white, western, relatively affluent man I'm torn between the idea that such a presention of strong Black bodies is insensitive, and the idea that the discomfort is mine alone to wear while a group of professionals get on with their job. It's a tricky question to raise, and I'm more surprised by the answer I get.

"You know, in Kenya we do another type of show. It's called a 'jungle show'. Here in Europe, let's say they can't do the African show!" Mlevi laughs, incredulously. Huka is equally bemused, explaining what a great show it is: "It has non-stop music. Non-stop show. It's a little bit different."

Huka is pragmatic. He talks about sensitivities around the animal skins they wear for some of their African shows: "Some of the Kenyans also, they don't like this costume. So we used to have three costumes and if they prefer the other one, we change!"

For Mlevi, if there's cultural sensitivities to be overcome, it's in the opposite direction: "In Kenya normally a lot of acrobats perform in African clothes, but for us we do it in suits! At home they were shocked! Mostly when we see people in suits they cannot do anything!"