Rarely visited and much neglected, Scotland's peat bogs are actually some of the finest, and most ecologically significant habitats on these islands. And, as Evan Beswick finds out, an inspiration for art 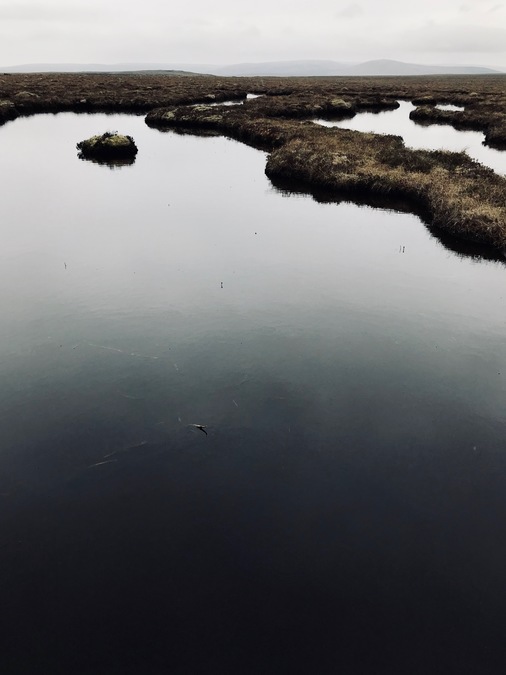 The Flow Country by Evan Beswick

“A good bog is wet and has lots of hummocks,” says Caroline Eccles, development manager for conservation project Flows to the Future, as she threads her way between peaty pools. On the evidence underfoot, we appear to be in a good bog. A very good bog, in fact: Europe’s largest single expanse of blanket bog, covering 200,000 hectares of Caithness and Sutherland.

Most never set foot this far north or visit the watery wilderness. The North Coast 500 route circumnavigates the bog; three windy roads and a train line run north to south, and the expanse is impassable east to west. A Royal Society for the Protection of Birds (RSPB) reserve serves the remote hamlet of Forsinard, my home for the weekend along with artists from the Glasgow-based collective Cryptic.

It’s a unique habitat. Accretions of sphagnum mosses are key to the bog's creation, providing a unique, wet, acidic environment for plant and bird life. Under Eccles’s tutelage, we soon learn to discern one sphagnum from another and sniff the lemony fresh leaves of bog myrtle. We pick out the bright red flashes of sundew and weird green fronds of butterwort. Hen Harriers and golden plovers are common here – but they don’t venture out in today’s drizzle.

This bog plays a vital role in climate change: it is a massive carbon sink. The Flow Country holds 400 million tonnes of carbon, double that of all of Britain's Woodlands combined. When bogs dry out that carbon goes into the atmosphere. The Peatlands Partnership, who lead on restoration efforts, have sought to engage the public in its protection via art.

It's not difficult to see why the visiting artists find the expanse inspiring. Life exists on two scales here, from the vast openness of the bog to the minute intricacy of the life it supports. It’s bleak and big and densely beautiful – the sublime and the picturesque washed together.

The residences are the springboard for a multi-sensory promenade through Edinburgh’s Royal Botanic Garden at the Fringe, including visual works by artists Heather Lander and Hannah Imlach to compositions by Luci Holland, Cathie Boyd and Malcolm Lindsay (whose choral work will be sung by the Dunedin Consort). This weekend Kathy Hinde and sound designer Matthew Olden are finessing their work: “There’s such a similarity between what artists are doing and what scientists are doing,” says Hinde.

She leads us on a "deep bog listening" walk, teaching us to plunge sensitive hydrophones into streams and pools, and point directional microphones at birds. A stretch of knicker elastic serves as a rudimentary aeolian harp, strummed by the south westerly. It’s a preview of the recorded sounds which form several installations. The hydrophones give access to a different world: burns sound like glockenspiels as the water burbles over pebbles; a scattering of sand on the surface is a scale outside of musical theory. “It was like a dream brief,” says Hinde.

An enthusiastic nature-watcher, she has worked with the RSPB before, extensively with field recordings. “For me, it’s grown from finding abstractions and fascinations with rhythms and [the sound of] natural things and to more purposefully trying to create works that specifically raise issues – to connect people in different ways to try and think about our relationship with the environment and what that means. We need to be thinking about ourselves as part of the environment and not separate to, or overlords, of it.”

Olden, meanwhile, spends much of Saturday afternoon hunched over a laptop. It displays an array of parameters and flow diagrams as he feeds in real data relating to the height of the bog as recorded from space. “Sometimes it can be quite a dry boring subject for someone to work through statistics,” he laughs. Though it's far from it: his programming approach enables audiences to 'hear' a graph. “I’m kinda obsessed with sine waves and the data is all sine waves. It’s my thing! It’s what I’ve been doing for the last 20 years.

“It was quite exciting coming up here. I’ve seen all the data maps. I know what it looks like underneath [but] that was completely unrelated to what I saw. So being in the landscape was really exciting.” Today he’s working with eight speakers. The full performance, over a lattice of 96 connected speakers, feels set to add to the spectacle the landscape deserves. He gets back to work: “I’ll see if I can get the bird in. That’s the bit I’ve got to test next.”

Climate in Crisis: The teams doing something. Anything.

Started two years ago as a means of celebrating the best of Canadian work, CanadaHub has fast become something of  an event in itself. This year, Anita Rochon’s decision not to travel internationally leads less to a problem and more to an artistic opening, as Pathetic Fallacy casts local actors in place of the creator which, really, seems a lot more interesting. CanadaHub is associated with Summerhall, the venue that this year hosts protest group Extinction Rebellion across two spaces in the basement for the whole month.

It’s hard to walk around Edinburgh in August without the feeling that it’s all rather wasteful. New venue The Greenhouse, by BoxedIn Theatre, presents a curated mini-festival of nine shows, all inside a venue built entirely from recycled materials. What’s more, the venue is zero waste with everything possible recycled or reused. And no flyers. Could it catch on? Tickets for shows and workshops are capped at £5 to ensure accessibility, and the creators are working towards Level 2 in the Venue Access Award.

Keep an eye on the hashtag, an initiative developed by Poltergeist Theatre, for info on what companies are doing to take sustainability seriously. Over 100 venues have signed up to the initiative. Summerhall, for instance, have cut out all plastic cups (Vegware instead).