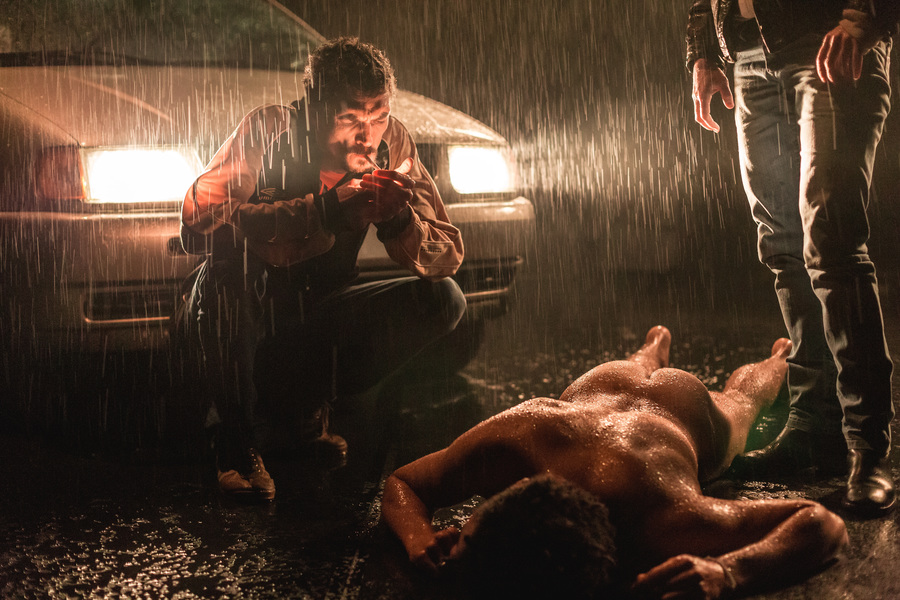 Milo Rau returns to that question in La Reprise: Histoire(s) du Theatre (I) (4 stars), reflexive docu-theatre that scrutinizes the killing of Ihsane Jarfi: the 32-year-old Belgian-Moroccan, left a gay club in Liège in April 2012, got into a stranger’s car and was found, 10 days later, beaten to death. His murder made a mark – a symbol of a symptom of social disrepair: unemployment, xenophobia, homophobia. It was and it wasn’t. Rau sees its senselessness in light of its circumstances.

La Reprise is at once a reconstruction and a deconstruction. It builds to a re-enactment of real events: a silver Volkswagen rolls out onstage, three men inside. Another, playing Jarfi, gets in – warily but willingly. He lets his sexuality slip, makes a joke and gets hit, hit and hit again. He’s bundled into the boot, bloodied, then dragged out, kicked senseless, stripped, pissed on and left, laid out on the floor. The violence is appalling and unflinching: so sudden, so spontaneous, so clinically carried through to its end. A camera makes the action into a movie. Onstage, it seems forensic and fictional.

Rau frames the way we watch. Restaging a précis of its process, it becomes a treatise on theatre itself. Everything hovers between fiction and fact, as aware of its own artifice as its reality. Casting Liège locals (an unemployed forklift driver and amateur DJ plays one of the killers) alongside professional actors, shuffling Hamlet’s ghost and Purcell arias into the mix, everything onstage becomes sewn into the world it represents. It asks how and why we stage real violence and whether we can do so responsibly?

La Reprise is self-aware, arguably to a fault, and its motives blur. Is Rau out to make a show or to make a difference? The two are inextricably linked – but there are other ways to affect change. Even so, La Reprise feels like a gamechanger; a rewriting of the rules that avoids appropriating victims or perpetuating myths.

That scuppers more straightforward stagings. The Incident Room (3 stars) works on its own terms—a staple police procedural charting the Yorkshire Ripper case—but in condensing its complexities into a brisk 90 minutes, it seems crude by comparison, even exploitative.

Set among the filing cabinets of West Yorkshire Police, Olivia Hirst and David Byrne’s script watches characterful old-school coppers struggling to spot patterns in a spate of sex workers’ deaths. With the body count rising and tabloid hacks on the prowl, their exhaustive evidence trawl ultimately proves unhelpful. Peter Sutcliffe was only arrested by chance.

It’s a potted history with a dramatic pulse, but The Incident Room has all the purpose of a Penny Dreadful. When one of Sutcliffe’s survivors says she just wants to be forgotten, the show’s own complicity becomes abundantly clear.

Bible John was never caught. 50 years ago, three women were killed in Glasgow after dancing at the Barrowland ballroom. Each showed signs of sexual assault. Each had been menstruating when murdered. It’s a grisly case that still captivates crime nerds – including the four women onstage, all obsessives in spite of themselves. Poor Michelle theatre company précis a fictional podcast seeking to crack the case.

There’s a craft to true crime: building tension, finding cliffhangers, laying false trails. Bible John (2 stars) blows them all, rattling through evidence at such speed that it’s impossible to keep up. The case blurs long before it’s left unresolved. Caitlin McEwan’s script attempts self-awareness, troubling at true crime’s lure, particularly amongst women, but it’s guilty of trading on the very same tropes: lurid sensationalism, digging up the past and reducing victims’ lives to the details of their deaths.

Anna Drezen (3 stars) is asking the same question in her Edinburgh debut, Okay Get Home Safe!. Why are women, herself included, so into true crime? She ups the stakes and the self-consciousness. Stood before a police tape glitter curtain, the Reductress founder kicks off with footage of female Ted Bundy fans, crammed into his courtroom, coquettish and confused. She takes sharp shots at male violence, but Drezen is gunning after the source of that attraction.

Like Lena Dunham, Drezen’s upfront about often unspoken female urges – however twisted or taboo they seem. She goofs about the genre but she’s after something slippery and substantial: the way wariness is instilled in women, the tangle of sex and submission (“Open your heart but carry mace”) and the commercial exploitation of that. Any idea how much it costs to burn a bra, she shrugs.

It’s a restless hour still seeking its final structure and Drezen deliberately derails it to avoid detailing her own traumas or addictions too deeply. Each time emotion threatens to intrude, she cuts to a tension-breaking podcast-style ad break – easy spoofs, yes, including the JonBenét Ramsey doll’s house, but a sharp exposé of the commercial motives that lie beneath true crime and confessional comedy.