You Can't Make an Omelette...

Comedy duo EGG are pushing for change in comedy, in more ways than one 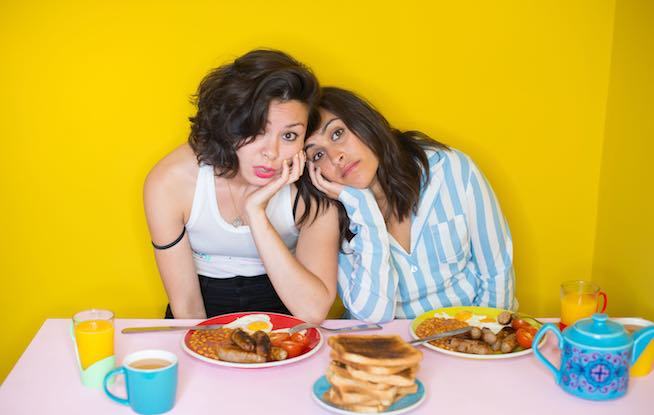 Over a 25-night Edinburgh run, how many double acts would be brave enough to improvise an “honesty section” of their show each night? Conceived as an opportunity for EGG's Anna Leong-Brophy and Emily Lloyd-Saini “to say things that piss us off about each other”, the pair reprise the exercise offstage as well. “The reason we can do it is because we really love each other,” Leong-Brophy explains. “We look after each other and we're kinder to each other than we are in our romantic relationships.”

Lloyd-Saini agrees. “It's so much healthier than our actual relationships. And our boyfriends have noticed.” Leong-Brophy smiles conspiratorially: “It would certainly be easier to find another boyfriend than another comedy partner I get on so well with.”

EGG struggled with unaddressed tension when they made their under-the radar Free Festival 2016 debut, borne out of also being part of improv troupe BattleActs! and Lloyd-Saini concurrently doing a standup show. This year, their commitments are hardly less onerous, with a play, more BattleActs! and a Radio 1 podcast with the improv outfit to record.

Still, they're having a “dream Fringe”, Lloyd-Saini enthuses of their acclaimed show Richard Pictures, a very funny sketch hour about toxic masculinity and feminism in flux from mixed-race performers seeking to take up space. “Audiences really seem to be getting it and enjoying it.”

Taking its cryptic title from the dick pic phenomenon, Richard Pictures explores harassment and diversity with a sure, light-handed touch.

“We were so tentative in our first year,” Leong-Brophy recalls. “Not looking to make too much of a thing about being brown women. But this year, with the way everything has moved forward, everyone recognises that this is worth talking about.”

Previews of the show “felt heavy on the anti-man”, she acknowledges. “But it's not that, it's a pro-woman show.

“Change is painful and we're in that seismic shift where people are realising it's inappropriate to do certain things. Women can't pay lip-service anymore and can actually move with feminism, so that's really exciting. My heart's not bleeding but I'm genuinely sympathetic to anyone who's essentially been living in a bubble their whole life and is now being told that everything they were doing was wrong.

“Guys coming out to say that they didn't realise how hard it was to be a woman, re-examining their behaviour, that can be brave. We're not attacking guys. Because even by coming to the show, they're shining a light.”

Notwithstanding the female friend who congratulated them by admitting that she didn't normally find women funny, a line that's now in the show, more characteristic has been the reaction of a “girl who stopped us the other day and said: 'As a young, mixed-race woman it's just so important for me to see you guys.' Because that was my experience growing up,” says Leong-Brophy. “There was no one like me on TV.”

Growing up with Welsh-Indian heritage in a predominantly white part of Nottingham, Lloyd-Saini “tended to forget I was brown”, and was shocked to begin her acting career and only be offered “servile Asian roles.

“Being mixed race, you sit on the edge of two worlds where you're not quite enough of anything.”

By contrast, Leong-Brophy was raised in Brent, one of London's most diverse boroughs. Of Irish-Chinese-Malay descent, she was “colour-blind, until I got to drama school and they'd ask me to do something from Miss Saigon.

“I'm more Irish than anything else but never get seen for Irish roles. In 10 years of acting, for the first six I was either getting breakdowns for prostitutes or someone who's lighting incense or a lantern in a mystical manner. Always in broken English.”

As a result she and Lloyd-Saini took matters into their own hands, writing for themselves or improvising for their stage time. Change is underway, slowly and uncertainly, reflected in their differing experiences of inclusion. The night we chat, Lloyd-Saini is appearing on BBC Two as part of The Big Asian Stand-Up. And working on the BBC Asian Network, “where I'm one of the only mixed-race presenters and they've been very lovely and welcoming”, she's nevertheless “had my eyes opened” to how the corporation has equated “Asian” with people of South Asian origin while ignoring those with East Asian roots, a disparity it's only belatedly addressing.

“It's nice to feel like they know we exist now. But what the hell?” Leong-Brophy fumes. “I'm not white enough to play white but I'm not Asian enough to be included in the 'diversity' section? So where do I fall? The answer is between the cracks. It's all very well living in an ivory tower of magic and whimsy where you think anyone can play anyone. But the statistics don't reflect that. I'm Asian too, give me a break. Or put me in a Brendan Behan or Sean O'Casey play at the National [Theatre].”

Radio 1 airs the BattleActs! improv podcast next month and EGG are currently developing a television sitcom. They're already working on their next show too, with Lloyd-Saini reckoning getting pregnant “is the only way I will get out of the Fringe next year.

“But Anna was like, 'that could be the third show concept! A pregnancy show!' So thanks for planning my sex life.”

Her friend smiles. “I'm here for you babe!”