Review: Better Together by Acá Theatre

Some lovely clowning and a valuable message 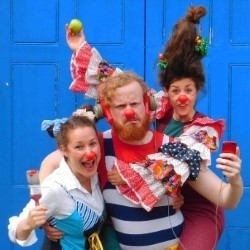 Missing one bus is annoying. Missing five over the course of 50 minutes, however, becomes more fun in Better Together, as the waiting game turns into a way to make new friends for the three clown characters of this sweet and well produced show. Design is bold and colourful, and expressive faces are unmadeup behind red noses on strings.

Strangers Doa, Squiggle and Tropezo arrive individually at the bus stop, and gradually overcome the isolating influence of their headphones and fear of engaging with others to become playmates. It's not a laugh-a-minute show, but nor is it intended to be; Better Together was created in response to reports by Childline of unprecedented levels of childhood unhappiness linked to the use of digital devices and social media. Francisca Stangel, Nick Eastburn and Avi Simmons are responsive and unforced in their Lecoq-inspired performance. Simmons' Tropezo is pixie cute and we warm to her as easily as Stangel's big-headed Doa and Eastburn's nervous Squiggle do. For all Tropezo's imaginative encouragement though, she has her own tech-vice to overcome in mobile phone gaming.

The show is advertised for children aged four to 10, however by the time the kids reach double figures, this will almost certainly be too slow and babyish for them. That's not to say there aren't moments for accompanying adults to enjoy though. A "lonely" playlist particularly tickles, as do wry acknowledgements of the theatrical setup.