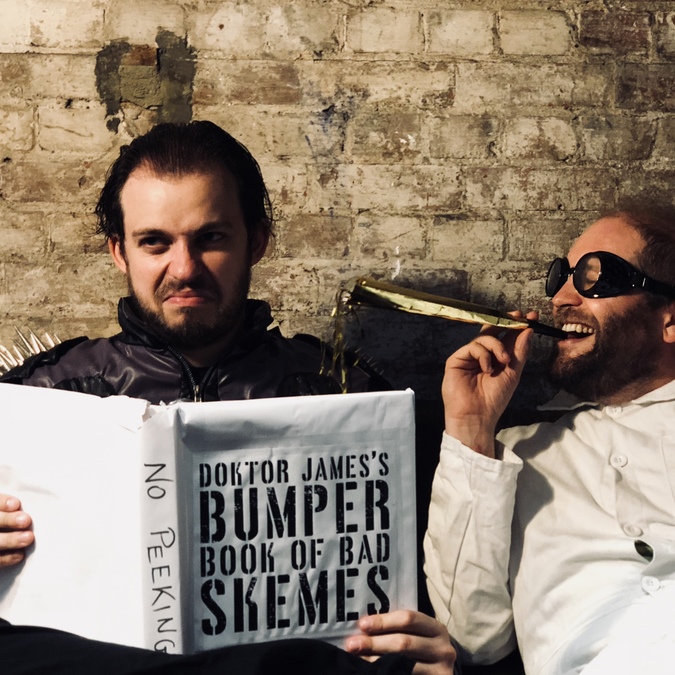 Doktor James is hugely ambitious and will do anything to achieve his goal of being number one on the supervillain leaderboard. He’s currently in last place, number one billion, on the list of the world’s villains, but he has a whole book of ideas and an audience of children to help him.

His henchman Timeon is also there to provide support, correct Doktor James’ mistakes and clean up his messes. News broadcasts regularly interrupt their plans with updates on other super villains’ and heroes’ activities, and provide inspiration and frustration to the pair and as well as structural variation to the show.

The play's generally straightforward – the evil pair consult a big book of schemes and carry them out with audience help. From building a clone army to creating a monster that will destroy the city, their ideas are silly and appealing to kids. The ending is too messy what with a series of twists, however. The show’s suggested age range is five years old and up. The heightened performances and interactive tasks are more suited for those around five or six, but they may struggle to keep track of the plot at the end. Kids much older than that are likely to find much of the show too young for them.

It’s a good premise because children always love baddies and it's lots of fun, but the specific audience demographic is rather muddy. There’s a huge difference between five-year-olds and eight-year-olds, and a too-wide target age means that the piece doesn't totally engage anyone.