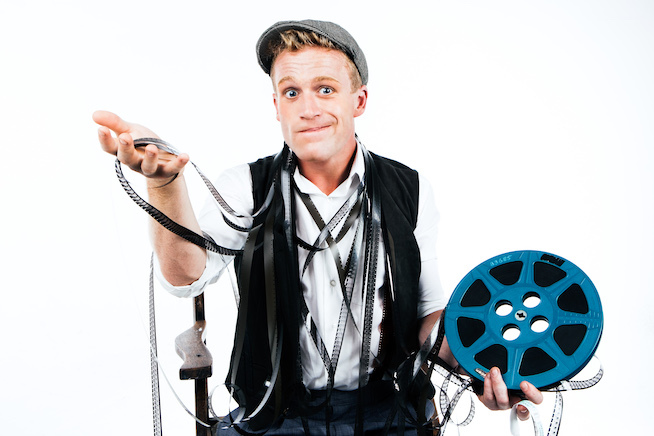 Slapstick is hard to get right, but amiable clown Tom Flanagan makes it look easy. A hapless projectionist attempting to screen a movie, he’s a hit with both grownups and little ones (the show is suitable for children age three and upwards) at this afternoon performance. So realistic is his tomfoolery, in fact, that my little girl bursts into tears every time he breaks something, falls down or bumps his head, and I spend a lot of the show reassuring her that’s he’s only pretending.

Flanagan has a lovely way with the audience, his amiable manner garnering no shortage of volunteers for the various fun bits of interaction, and a near constant rumble of chuckles that frequently breaks out into raucous applause.

A few impressive acrobatic tricks punctuate the performance but the main draw here is classic clowning with a silent movie vibe, including an inspired nod to one of Buster Keaton’s most famous stunts.

The only bit that strikes a bum note is when Flanagan romances a woman from the crowd, forced to recreate the plot of the film he’s failed to screen because the projector is belching smoke and the screen is lying in tatters on the floor. It's all very mild-mannered but demanding physical affection from an unwilling participant feels like the wrong message to be giving young audiences, even in jest.

The other problem with this section is that it's anticlimactic after the wonderful chaos of the preceding 40 minutes, slowing the action right down when Flanagan would do better to build to a glorious finish. Some aspects of clowning tradition are better left in the past.