Review: Shhh... The Elves Are Very Shy by Ipdip Theatre

Complete with a star turn from the actual elves 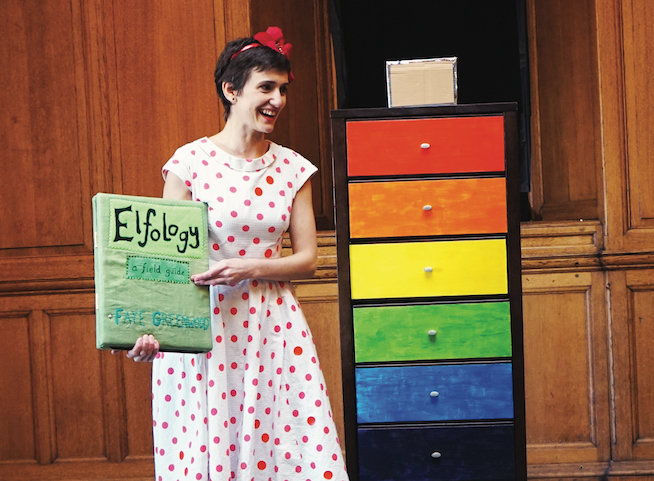 Scottish early years theatre company Ipdip are back at the Royal Botanic Garden Edinburgh with another gently interactive show for the youngest audiences. This year they’re performing inside the visitors’ centre rather than in the gardens themselves which, while a sensible move given the unpredictable Edinburgh weather, loses some of the uniqueness of their previous offerings.

Shhh... The Elves Are Very Shy takes the form of a lesson in “elfology” from mild-mannered “elfologist” Dr Faye Greenwood, the aim being to put Greenwood’s titular tiny friends sufficiently at their ease so they’ll come out and play. Writer and performer Charlotte Allan is approachable and engaging as Dr Greenwood, making sure that every young audience member feels included as she cooks up sweet-smelling bubbles to tempt the elves out of their hiding place, leads some music making and supervises a stickering session. The little poems that act as introductions to each of these sections, however, are overly twee and not always clearly articulated.

The kids are having fun during all these sensory shenanigans, but the show’s pièce de résistance is the eventual appearance of the elves themselves via a clever bit of video in a box made by Paul Kozinski. It’s such an effective trick that my toddler spends the walk back to the bus stop through the gardens genuinely hunting for Greenwood’s little buddies. We don't find them – I want my money back.