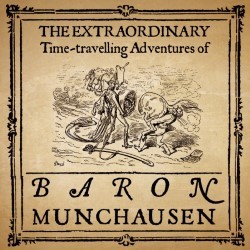 The improbably tall tales of the equally fictional Baron of Munchausen have been entertaining people since German writer Rudolf Erich Raspe created him in 1785, loosely inspired by a real-life nobleman. From extracting sunshine from cucumbers to flying a rocket to the moon, Munchausen has 'done' everything. He's also been put on the big screen by Terry Gilliam and given his name to a psychological disorder.

This kids' show has a brilliantly simple premise: use Munchausen's talent for telling porkies as the basis for a comedy improv hour. With a copy of Raspe's book in hand and a table of toy box props, Lord Lovell (Nigel Lovell) introduces a succession of colourful friends (other comedians at the Fringe) to a small stage in New Town Theatre's basement. With cues from the audience as to which of the Baron's adventures to use, they spin off tales in every direction.

With three comedians, there's time for about six stories per show. A word of caution: if you're a Munchausen purist, be prepared for the fact that not even the title of one of the original tales is likely to emerge unmangled. These are often just launchpads for journeys into the fantastic and the funny – improvisations dictated by suggestions from the audience.

The whole thing is a blast, hosted with child-friendly irreverence by Lovell and buoyed along by the gameness, ingenuity and sometimes grinning haplessness of that day's comedians. This show is a great pitstop for a laugh.