Blueswater Presents: Queens of the Blues 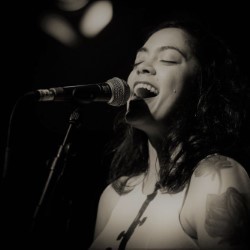 Queens of the Blues

You may be forgiven for thinking that a set that takes a closer look at some of the neglected figures of blues history would be a bit niche – one for the blues nerds. In fact this is nothing of the sort, and is a toe-tapping romp through some well and lesser-known blues hits which is almost impossible not to boogie along to in your seat.

That's helped by a ridiculously tight band of musicians and an extremely charismatic turn from Nicole Smit. Her slightly mercurial hold over her band—and it is her band—is absolutely appropriate for a set which recognises the contribution of women such as Big Maybelle Smith and Blanche Thomas to the development of American popular music. It also recognises what absolutely belting interpreters they were, and Smit sits comfortably in that category. Karaoke this ain't. A performance of Ma Rainey's 'C.C. Rider' for instance, doesn't impersonate, but hints at those big-chested wails just enough to pay homage.

Two criticisms. First, the pictures of the aforementioned queens, clipped onto the stage backdrop, are cartoonishly, grotesquely bad. Secondly, it can get a little samey. This is unashamedly heavy, showy blues, and every trick in the book is deployed with abandon – all stop time pauses, glissandi and rushing crescendos. Absolutely it gets the crowd going, but feels a bit cheap when there's so many textures left unexplored. Smit's vocals could also, I'm sure, handle a little less reverb. But for a fun, furious hour of the blues, you can't go wrong here.