Doug Segal: I Can Make You Feel Good 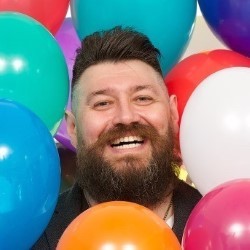 As a man delivering a combination of light comedy and feats of mind-reading, Doug Segal provokes inevitable comparisons to that doyen of TV mind games, Derren Brown. These comparisons are not appropriate. Segal is not in the same league. The overall impression tonight is of a nice, charismatic man, failing to hold a number of frayed edges together.

First, none of Segal's claims quite add up. This, he tells us, is performance steeped in scientific research—from the University of Harvard, no less—on how to make us happy. But, beyond something obvious about endorphines, that in-depth reading isn't apparent anywhere other than as a flimsy way to package his box of tricks. Also, for an apparently scientifically-sound show, a smattering of Higher maths will leave you in no doubt that his calculations of event probablity in a card game variant leave a lot to be desired.

Secondly, illusion needs to be slick to foster a degree of awe. But most tricks here are over-laboured and scrappy versions of routines you've seen before. You can't claim you never touched the cards, when you quite clearly did. It's not misdirection if the lectern brought on for a particular trick and then immediately removed is so obviously central to its mechanics. And you can't change an audience member's phone number guesses until they get them right. There's a genuinely impressive guessing of lottery numbers, which is both unfathomable and well paced. But overall, Segal's jolly presence can't lift this beyond amateurish.