Gruff Rhys: Signs of the Times

The Super Furry Animal tells Si Hawkins about diversifying his live shows, debuting at the Fringe, and selling a tank to Don Henley 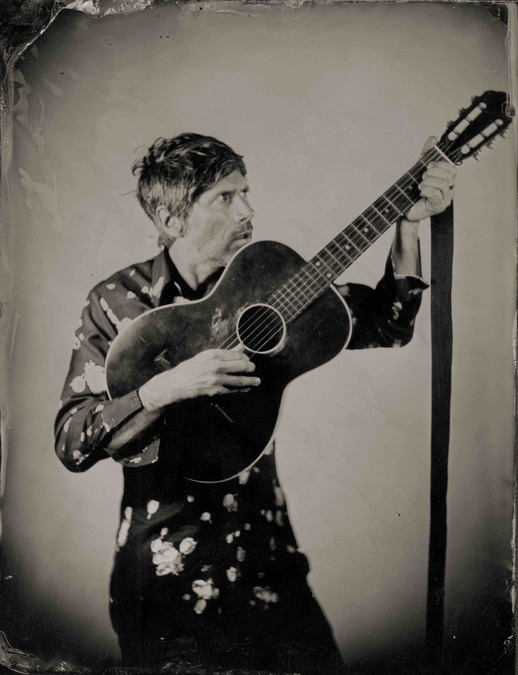 If Gruff Rhys ever diversifies into a different artistic field, it may not be spoken word or theatre, even though the singer now flirts with both in live concerts. It will probably involve signs. He was recently commissioned to write an anthem celebrating 70 years of the NHS, for example, but is more enthused when recalling the launch event. There he got to present the song’s lyrics—and powerful, political lyrics they are too—in a more visual fashion.

“I got to make my biggest sign yet!” says Rhys, down the phone from Cardiff, his splendidly sonorous North Wales tones suddenly rising. “We hired one of those vans, with the billboards either side. That was quite exciting.”

Signs will also figure heavily in his new show, kicking off on the 17th. Rhys—best known as frontman for the fine Welsh band Super Furry Animals—is making his Fringe debut with Resist Phony Encores! which features songs from his 25-year career, and more. Definitely involved in the eight-date run will be cue cards, an idea that initially came about because he doesn't like "patronising stage banter”, he says.

“That started for my first solo tour. I was doing a lot of sampling, so I got a blackboard to communicate with the audience what I was doing, give some commands. Then I started using printed signs. It started to get a bit out of hand. All the signs I’ve ever used, I’m going to bring up. That’ll be a lot of instruction. Quite extreme levels.”

Challenging music’s norms is Rhys’s natural state. He emerged with the Super Furries during the heady 1990s Britpop era, on the same label as Oasis (Creation Records) but with a very different approach. SFA took off in all sorts of interesting directions: going techno, releasing albums in Welsh, buying an actual military tank to take to festivals.

Where is it now? “The tank,” he says, nonchalantly, “was sold to Don Henley.” Don Henley from the Eagles? “From the Eagles. He’s got a ranch where he keeps them. He had no interest in the band. He painted over our logo.”

That conjures quite a picture too, Henley covering up SFA’s badge, like some statement against alternative music. “It’s a beautiful image,” Gruff agrees. “Off the royalties of 'Lyin' Eyes', he drives around rural Texas in armoured vehicles.”

Despite his aversion to between-song "bants", Rhys’s solo shows have veered away from pure music in recent years. American Interior, in 2014, was a concept album about the Welsh explorer John Evans, and the tour show introduced elements of storytelling and even puppetry.

“That was a lot of fun to do, and I remember at the time people telling me, ‘You should take this to Edinburgh'. But I didn’t know the workings of it.”

Then an invite arrived, so he put this new show together, mixing songs from the archives—including his most recent album, Babelsberg—with the cue-cards and another low-tech visual aid.

“This is just me, with a slideshow, so I can talk crap between songs without making other musicians feel uncomfortable,” he explains.

“Diversification is all the rage if you’re a farmer, but I don’t know about music. I’ve fallen into this and never really planned it; it’s all an extension of the songs. But hopefully it’ll put some pressure on, it’ll help me change the show every night as well. You get repetitive strain injury if it’s too similar, it becomes weird. Because I don’t have the traveling to do, during the day I can practise different songs. In theory.”

Rhys is still relatively clueless about the Fringe experience, in truth, although he has performed at Edinburgh’s film festival. On YouTube you can find a bizarre duet with the comic actor Kevin Eldon, who appeared in a film that he soundtracked: Set Fire to the Stars. “He offered to be a human saxophone,” Rhys explains.

The singer has also tackled weightier topics, in recent years. During the run up to the EU referendum he released a catchy ballad called 'I Love EU', which, he admits, “failed!” Still, if that period taught us anything, it’s that writing stuff on a big vehicle can be oddly effective. So, by now tankless, he personally pasted the NHS lyrics of another of his issue songs—'No Profit in Pain'—onto the aforementioned billboard van.

The track was more caustic than anyone expected, railing against privatisation and certain individuals. “Just going, ‘I love the NHS’, would be like saying, ‘I love oxygen’,” muses its author.

He certainly made a point. So might more mighty visuals be forthcoming?

“I’m sure there’s scope for bigger signs,” he says, and turns slightly wistful. Watch that space.