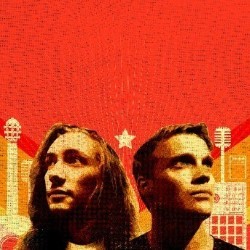 Jamie MacDowell and Tom Thum seem like thoroughly nice boys. The stage for this performance by the musical duo—MacDowell on guitar and vocals, Thum beatboxing, both of them kitted out with loop machines—hints at street culture, their names spelled out in blocky graffiti letters. But there’s not much else gritty about this polite and softly spoken show – and there’s nothing wrong with that.

Thum is a prodigious talent and effortless performer, layering up beat upon beat and effect upon effect to create thumping tracks that it’s easy to forget come from the mouth of just one man. He’s humble with it too (that niceness again) – without the macho braggadocio that can make hip-hop culture feel exclusionary. MacDowell, meanwhile, plays soulful, lyrically rich numbers reminiscent of Jack Johnson, but minus the dreadful tweeness. He has a beautiful voice, enhanced by crystal clear diction that means that for the most part, his poetry has the chance to really land.

They perform solo a couple of times, but it’s where they’re working together that this set really shines, from the demystifying intro, in which they show us their tools of the trade, to the magical moments where they lock eyes as they lock into each others’ groove.

Jamie MacDowell and Tom Thum aren't doing much that's particularly new here, and as result, this gig isn't going to rock anyone's world. But it’s a shame there’s no room for dancing in this lecture theatre performance space – I, for one, would have been up like a shot.