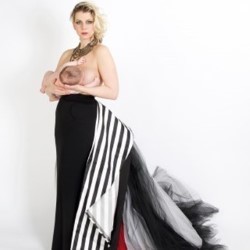 From the moment she processes onto the stage, fairy-lit umbrella held aloft, in what can only be described as a 'gown', to the strains of Yair Evnine's electric cello, you know you are in the presence of Fringe royalty.

Lady Rizo may hail from a hippy commune in the Pacific northwest but she commands her titled status and presents to eager audiences as a combination of elegant grandeur and sisterly embrace. Once the diva, the bustle, and the train have made it to the stage she croons, 'Help Me Make It Through the Night' and there's not a man, woman or dog in the house who wouldn't willingly do that.

A more jazzily mashed version of 'Mother' by John Lennon follows. Which brings us to her central theme: since last appearing, Rizo has had a small person ripped from her "vagine", and revels in fresh stories of pain, pleasure and plenty of bodily fluids. Her pipes, upstairs and down, are clearly in good order, but on top of her effortlessly pleasing vocals is now a layer of worldly observation alongside the usual filthy chat.

She bends an original composition, 'Loving in Colour', then, following an anecdote about IKEA, pulls off a coup de théâtre that is suddenly, touchingly, so beautiful, tender and engaging that the entire audience catches its breath. And then she swigs from a cocktail, fans her voluminous skirt over the entire audience and tells us how she loves us. Immense.