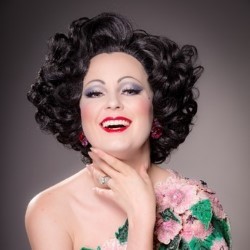 Another night, this may be worth a higher rating but it’s the nature of Lili La Scala's strenuous curation that each evening she selects eight different acts she’s been researching since May to form a fringe showcase. Maybe we were just unlucky to get a dull contortionist, an Australian hula-hooper and a hapless pianist who played ‘Delilah’, badly, as a community singalong.

La Scala took pains to explain burlesque to the audience: perhaps she should also have explained it to practitioner Tom Harlow, whose marshmallow-buttocked twerkings fell short of Ivy Paige.

La Scala herself wasn’t totally on form—she can be delicious when her song stylings match her penchant for thirties vintage couture—but the patter was trite. ‘Let Me Entertain You’ felt like a threat rather than an invitation, and the Bowie tribute number, ‘Space Oddity’, was simply misjudged.

The show went up late and overran, two Edinburgh unforgiveables: and maybe it would be better not to charge a ticket price for something that’s mostly advertising participants’ other shows.

La Scala has recently embraced motherhood. In her show, Lady Rizo capitvates audiences by breastfeeding on stage, so it’s a pity that La Scala’s toddler is too big for a nappy change in the spotlight – it might have brightened up proceedings.