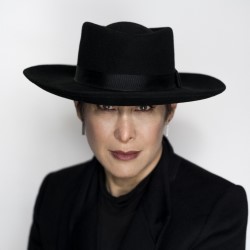 For triple Grammy-nominated artist Michelle Shocked, truth and reality are oppositional things. “You can have one, or you can have the other, but you can’t have both,” she claims during a show in which, at her most lucid, she seems to be arguing that ‘reality’ is open to misinterpretation.

True: in the recording that propelled the Texas-born singer/songwriter to fame, her voice was actually distorted because the Sony Walkman it was taped on had weak batteries. And true: Shocked’s words have repeatedly been taken out of context by what she calls the “outrage machinery” of the internet. But in Truth vs Reality—in which Shocked reflects on her controversial career in between songs from her Mercury Trilogy albums—she sets up her own contradictory realities, too.

In the dimly-lit bar of The Boards, where the candles on the tables are fake and there are empty gold frames on the wall, Shocked takes a stance against journalists (“the truth is coming out,” she says darkly), but later rails against the damage done to them by the digital economy. She explains her resolve to give the show “direct to my people” before describing how, in a now infamous speech made during a gig in 2013 that was widely felt to be homophobic, she “overestimated the audience’s ability to understand”.

The most straightforward part of the show is Shocked’s songs, which she performs with passion, wit and character. “I’m really working hard for y’all,” she says after one; in a show otherwise dominated by careless outrage, this at least is a reality that fits with the truth.