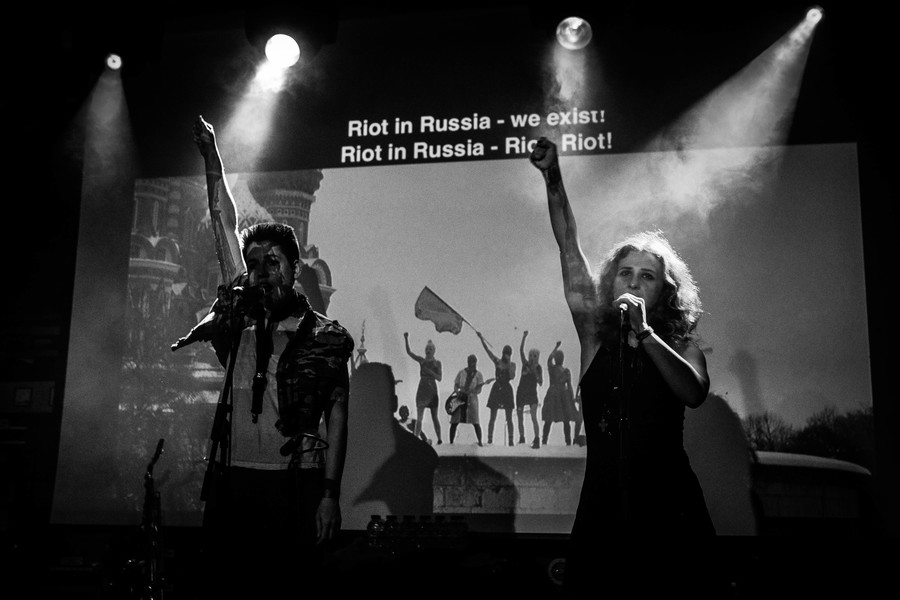 Somewhere between punk, prayer and protest, Pussy Riot tell their story. The anti-Kremlin activists trace their chronology like a chant, their words translated and illustrated with archival footage on screens above the stage. Glares fixed and voices low, the thrill comes from their radiating tension, while the performance itself is simple storytelling, orchestrated by overdriven bass and synthesized shrieks.

Riot Days is Maria Alyokhina’s story, based on her book of the same name. That only days ago she was stopped from leaving Russia by plane and had to sneak across a land border is a reminder that this isn’t just political theatre, but performance feeding into the fight against fascism. It's rare that a musical performance gets into the history books.

The gig feels angry though not anarchic, a punk manifesto with rules and objectives. With increasing fury, they describe the logistics of sneaking an electric guitar into the Russian Orthodox Church, the thrill at performing their 40 seconds of crime and their tortuous treatment in a Russian detention centre. Bathed in red light, they belittle Putin and invite rebellion. Hardcore techno pummels louder behind the words, taking over to wash them in digital punk as they dance.

At some points, their faces are covered in their trademark balaclavas and ghoulish metallic masks. At others, they bare their faces, hair ragged and stares fierce. Even when they release their limbs and throw themselves around the stage, their faces stay fixed in a frown. Get to the front and join the riot.