Roulston & Young: Songs for Lovers (And Other Idiots)

Roulston & Young are a musical match made in heaven 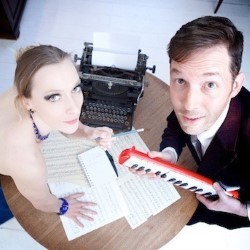 Michael Roulston and Sarah-Louise Young are, they assure the audience, quite unequivocally, not a couple. But with the palpable natural chemistry they display in their latest Fringe cabaret, onlookers could be forgiven for thinking otherwise. Their sparkling camaraderie might be the highlight of Songs for Lovers (And Other Idiots), were it not for the remarkable musical and lyrical flair with which they explore the terminally messy business of love.

After a chipper and charmingly self-deprecating musical introduction, the pair breeze through a series of meticulously crafted songs with a seeming effortlessness that belies an exceptional musical proficiency. Roulston's sprightly piano melodies weave through whip-smart punchlines and exquisite double rhymes, as the pair use familiar song structures and regular rhyme schemes to establish implicit expectations that they confound to brilliantly humorous effect.

Their subject is hardly original, but Roulston and Young approach it with wit and ingenuity. A song bemoaning the distracting influence of technology on relationships could easily have been trite and facile, coasting on the cheap rewards of recontexualising familiar references, but in the hands of Roulston and Young the concept is made fresh and frightfully funny.

But within their bright-eyed irreverence, the pair also infuse moments of poignancy, striking a careful balance between humour and pathos that enhances both effects. Their witty observations on procrastination slide seamlessly into a moving reflection on divorce, while a romantic ode to a lover is cut with comical asides just before it threatens to drift into earnestness.

The sheer virtuosity with which Roulston and Young perform is deeply impressive to watch. It is clear that these are artists with an intuitive yet finely-honed mastery of their craft, and Songs for Lovers (And Other Idiots) sees them on dazzlingly brilliant form.