This wickedly funny, animated mini-opera about octogenarian revenge is a complete treat 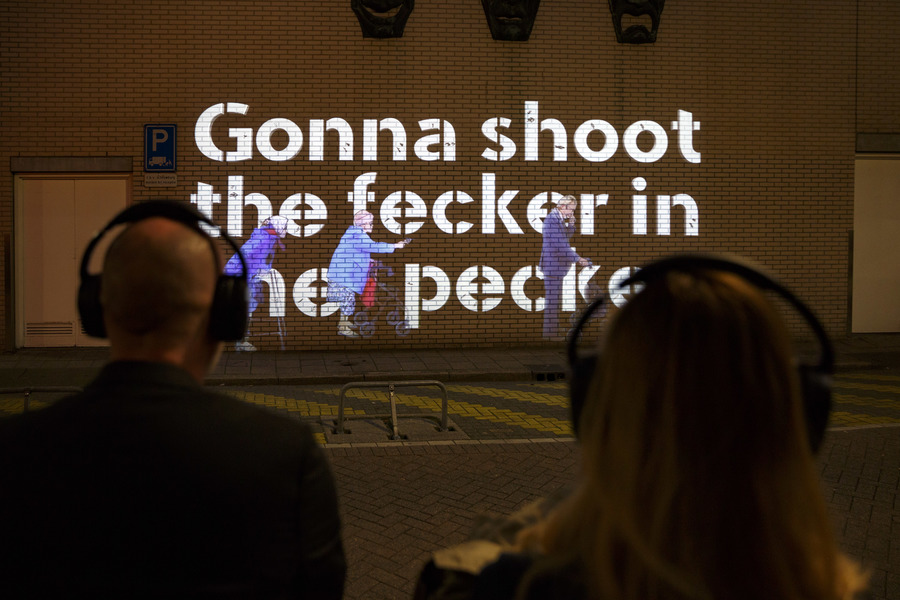 Animated mini-opera Drive-By Shooting is a short, snappy—and £3, bargainous—treat, projected for 15 minutes, multiple times per day, onto the walls of Summerhall’s terrace. This darkly funny, street-level piece is like an Alan Bennett play crossed with GoodFellas.

A Zimmer frame-using old lady in stencilled animation complains furiously to her friend that her husband has been playing away with the next-door neighbour. She’s had enough. She’s going to “shoot the fecker in the pecker” with his daddy’s gun.

Supported by, among others, Irish National Opera, this installation piece by composer Brian Irvine and librettist John McIlduff is a visual art translation of an eight-minute opera initially performed live by Doreen Curran and Sylvia O’Brien.

This wickedly witty short uses the high drama of opera to turbo-charge net-curtain domestic anger into a comic art form conscious of its social conditions. We only spend a few minutes with the conspiring killers, but they’re instantly cheer-able as they plan for a prison stay that’ll be cheaper than paying for healthcare.

McIlduff’s production—which uses headphones—buzzes with imagination, from the shaking, collapsing surtitles to the octogenarians’ relentless shuffle on the spot. It’s like watching a comic strip blaze into life on a trip to the shops. And it’s glorious to see these women take centre stage in opera form.

Drive-By Shooting’s portability, its freedom from having to be watched in a conventional performance space, with all that brings, is great. There’s something liberating about it. Hopefully, these anti-heroines will be roaming a few more streets yet.