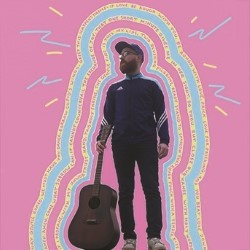 Romeo & Juliet: A One Man Musical

As the modern equivalent of a lyre, the softness of an acoustic guitar may well complement the themes in Romeo & Juliet. But this interpretation of the five-act love story is four acts too long.

Rob McGlade is a dedicated performer and talented musician, with this production more closely resembling an open mic set than a stage show. But it’s less a breakaway success and more a pub gig where one performer has taken the stage hostage, so determined for their time in the spotlight that they refuse to let it go. The Bard barely gets a look in, with his lyrics sung so quietly and out of tune that they fade away behind the accompaniment.

McGlade plays to his strengths as a guitarist. But by focussing on the music over the words, the entirety of Shakespeare’s iconic phrasing and metre is almost entirely lost. Even the primary colour, school disco style lighting can’t distract from the drudgery.

There are glimmers of hope in this otherwise awkward break-up album. The famous balcony scene and final suicide are approached sensitively, and—when you can hear the lines—each act is well summarised with intelligently chosen verse.

But despite his obvious enthusiasm, McGlade’s interpretation is mismatched and disjointed. After two scenes of a flat attempt at narration, the audience is left wondering, is this it?