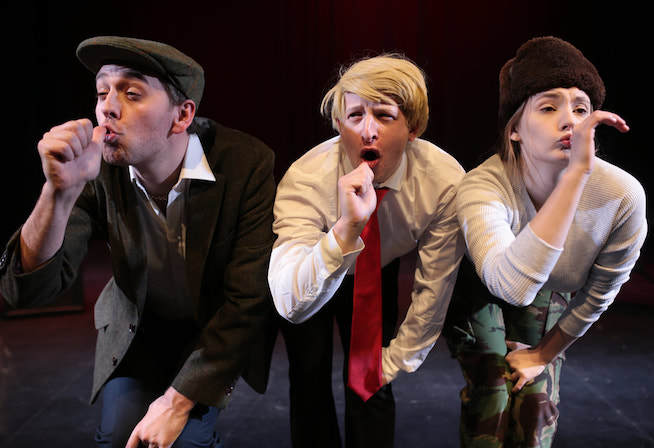 There are plenty of shows this year (and undoubtedly the next few years) based around political events. This year, Brexit and Trump-themed shows are inescapable, and their titles suggest Fringe clickbait. Blowfish Theatre's Trump the Musical, however, is a pleasant surprise, using satire to the extreme to present a colourful future of politics which leaves us partying in a Moscow sex dungeon.

Set in the future, we follow Trump and his 623rd press secretary as they set off for the UK, where King Nigel Farage (!) is in charge. The Brexit deal is done and there's a plan to sell Scotland and, with other key figures such as Putin and Kim Jong-un (both played by an outstanding Natasha Lanceley) looming in the background, ready to pounce, and a secret agent in the mix, nobody can predict how this story will unfold.

There's a touch of the amateur about this show: a small gold curtain hangs at the back of the stage; heads poke through it, bobbing along with the music. This aesthetic feels homemade, as if the actors have gone rummaging in a charity shop for their costumes, like children giving their parents a show in the garden.

The cast don't take themselves too seriously, eager to have fun with the audience, and this infectious vibe spreads across the room. The songs (by Dominic Lo) are excellent, and though not always sung in perfect harmony, perfectly satirise our current state of affairs.