Telling the story of Edinburgh's pioneering LGBT bookshop, Love Song to Lavender Menace reminds us that humane spaces have to be created and nurtured 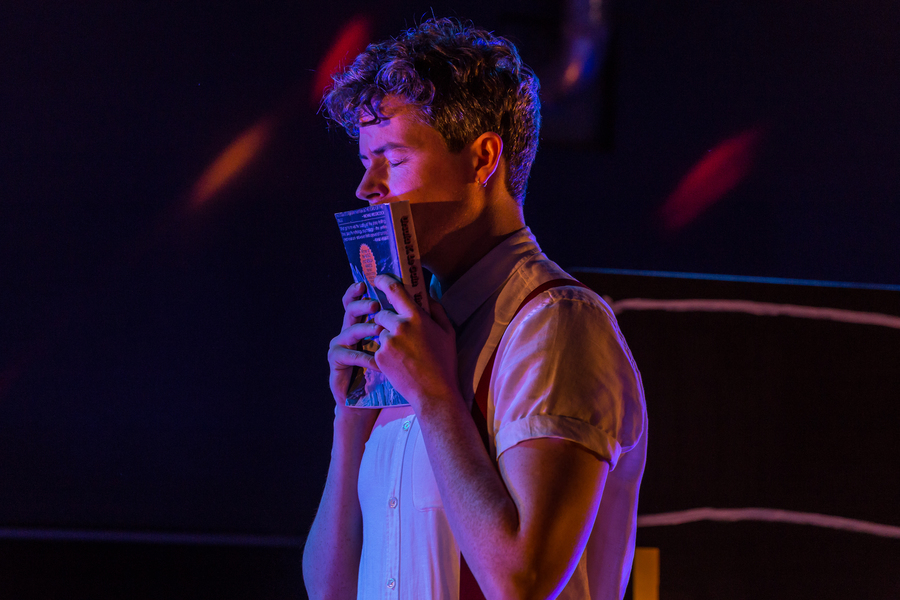 In the cloakroom of Fire Island on Princes Street, 1982, woozy clubbers were sold LGBT+ books. A novel held alongside a half-drunk bottle, or a memoir scrunched into the waistband of a pair of jeans. “It’s so unlikely,” notes James Ley, writer of Love Song to Lavender Menace, an homage to the bookshop. “That’s why the story grabbed me.”

The cloakroom venture was successful enough to grow into a bookshop in a basement flat. It was named Lavender Menace, after the New York lesbian radical feminist protestors of the 1970s, and from 1982 to 1987, the bookshop provided a space for the LGBT+ community in Edinburgh.

It is here, on the last night of the shop’s existence, that we drop in on booksellers Glen (Matthew McVarish) and Lewis (Pierce Reid), reflecting on the shop’s final chapter.

Only a few years after homosexuality had been decriminalised, many people were still shy in public. Where nightclubs may intimidate, bookshops welcome. “That’s the magic of them; they’re such humane spaces,” Ley says.

“You’re surrounded by ideas that are likely to back up every human experience. I think any gay person in any bookshop is going to feel a bit safer, a bit more accepted by literature, particularly in Lavender Menace being surrounded by books which endorse who you are.”

Even so, Ley came across stories of people “doing the recce”. They’d walk past the shop multiple times before going in, or shuffle away for fear of what people would think. “I remember doing it too,” Ley admits. Too young to have visited Lavender Menace, he would go to London and circle a shop, trying to “pluck up the courage” to walk in. “I remember those kind of cover ups you felt you had to do. How can I communicate that I didn’t know what the shop was, that I just stumbled in?”

Ros Philips’s direction nods to this. With Glen and Lewis chatting in the bookshop, another character repeatedly passes on his lunch break, trying to work up the confidence to walk inside.

Binding fact and fiction, much of the play is inspired by the first-hand stories Ley has been told. Today, his role as an observer has drawn his own character in the story. Through the chains of conversation, reunions have sprung up and Ley has been invited to become an honorary member.

“It’s really interesting to not just research into that world but become a part of it. You feel a bit of a weight of responsibility.” By writing the play, Ley has also been able to connect many booksellers and customers—including a number of couples still together—with the founders of the shop, Bob Orr and Sigrid Neilson.

Commissioned as part of LGBT History Month two years ago, playwright David Greig saw a reading and invited Love Song... to perform at the Lyceum. It sold out all subsequent runs and returns to the Fringe this year to a very different space at Summerhall. Transferring a large set to a space with a 15 minute get-in time means significant adaptation for Mamoru Iriguchi’s designs, though Ley’s team are determined “to keep the magic of it”. With wobbled outlines and lit-up book spines, Iriguchi’s design is suggestive both of bookcases and a cityscape at night. It is “a bit like a memory”, Ley says, a visualisation of the stories that make up the city.

As the personal and political intertwine, Love Song perches on the edge of loss of hope. The AIDS crisis was about to hit and Section 28, the controversial law banning the intentional promotion of homosexuality, was around the corner. Glen and Lewis’s relationship remains a question mark as they get ready to say goodbye to the shop, and perhaps to each other too.

The Brexit vote happened just before Ley started writing, and he was curious about the idea of throwing away something that other people had fought for. Despite these marks of despair, optimism lies at the play’s core, running through both the romantic comedy and the ambition of the bookshop. “The shop is small,” the playwright admits, “but the impact it had was huge.”

Hope feeds into the way Ley talks too, and when discussing the play, relationships, books and his city, his outlook is romantic. At the Fringe, he adds, “everyone has that little love affair with Edinburgh. Hopefully we can be a part of that.”