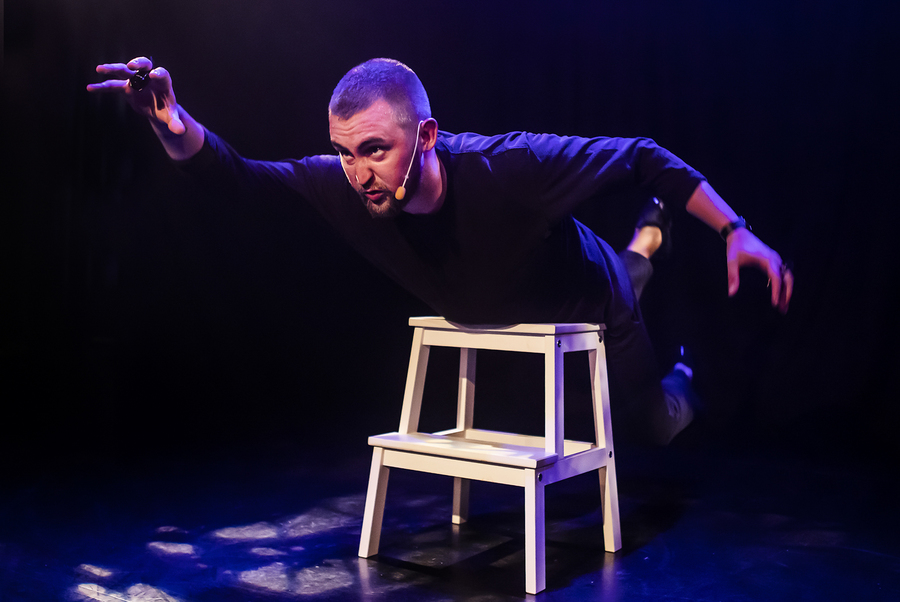 Imagine a lo-fi version of The Princess Bride with every role performed by an increasingly sweaty lone thespian, and you're not far from the hilarious and virtuosic Boar. Lewis Doherty is the man of a couple dozen voices, rendering each scene vividly despite having nothing more than a two-step stool and a couple of rear bike lights on his middle fingers to facilitate the illusion of an epic.

The breakneck fantasy adventure begins at sea, with a ferocious pirate readying a raiding party. Their pillaging of a small coastal village leaves only two survivors: a wild-eyed young boy and a baby girl. Seventeen years and some wavy hand effects later and these orphaned urchins are badass renegades out for blood.

Doherty's physicality and tour-de-force voice work is the chief selling point. His transformation from character to character tends to be accompanied by wooshing sounds, which both evoke a kid at play but also evince a cinematic quality. During a Mexican standoff between title character Boar, his deadly ward Ylfa and two thieves who claim to be the greatest in the land, these whooshes suggest crash-zooms and whip-pans to sweaty close-ups. A chase on horseback from a bounty-hunting bear with a Scottish accent, meanwhile, has the intensity of a James Cameron action scene and a battle with a misogynistic dragon would put Peter Jackson to shame.

The cinema comparison continues with a post-credit scene linking Boar to Wolf, Doherty's 2018 Fringe hit riffing on '80s neo-noir. Forget the MCU: this is a cinematic universe we can get behind.