One of the lynchpins of Scottish theatre, Cora Bissett talks to David Pollock about growing up, and about looking back on works which are in her past, but very much present at this year's festival 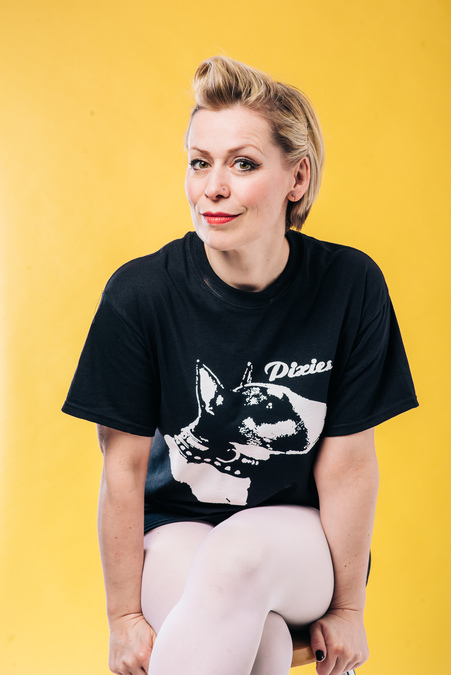 Widely—if unglamorously—known as the birthplace of the economist Adam Smith and the former Prime Minister Gordon Brown, the Fife coastal town of Kirkcaldy had a brief but altogether more exciting claim to fame in the early 1990s. Then it was the town which gave birth to Darlingheart, a Scots indie group which signed with a major record label, toured with Blur, Radiohead and the Cranberries, and stood tantalizingly close to the edge of Britpop stardom.

Until, all of a sudden, it was over. "For two years, it was a total rollercoaster," says Cora Bissett, Darlingheart’s sometime lead singer, who went to school in Kirkcaldy and grew up in nearby Glenrothes. Now she’s telling the story of her first brush with stardom in What Girls Are Made Of, the Traverse Theatre’s key homegrown production of the 2018 Fringe, under the direction of outgoing artistic director Orla O’Loughlin. “It’s kind of my life story,” she says with a laugh, “but I’m cautious about saying that, because it sounds horrifically self-important!”

If it’s fair to describe her as a failed rock star, it’s certainly fair to balance that by pointing out that Bissett is one of the most skilled and successful Scots theatremakers of her generation. Following her band’s split she attended what is now Glasgow’s Royal Conservatoire of Scotland, and in the last decade has made her mark as the director of acclaimed plays including the 2012 Olivier Award-winning sex-trafficking drama Roadkill, the 2013 UK Theatre Award-nominated musical Glasgow Girls, about schoolgirls who campaigned for asylum seekers, and the National Theatre of Scotland’s 2017 adaptation of Emma Donoghue’s novel Room.

“My dad passed away a couple of years ago, and we were clearing out the house to sell it on,” says Bissett. “I came across my old diaries in the attic, and as I was reading them I could hear myself growing up between the pages, forming from a schoolgirl into a young woman. And he was the most unshowy man, but I also found a box of ‘Cora’s clippings’ which he’d kept from those days. That broke my heart a little bit.”

As Bissett was reintroduced to her teenage self, she also mulled over the fact it had been exactly 25 years since Darlingheart’s album was released, and that now she’s a mother of a young girl herself. “She’s growing at a rate of knots, and every day I have to help and guide her journey through life. It made me reflect on my mum and dad and what they must have felt packing me off to a record deal at the age of 17, which was like a bomb going off in my life. And then I had to put myself back together again after it.”

Bissett’s track record tells us we should get excited about this show – a theatrical memoir which promises insight into family, fame, memory and motherhood. She will be performing it with a live band, in similar fashion to another of her past directorial hits which is back this year. Written by Peter Arnott and starring Angie Darcy in a bravura performance, Janis Joplin: Full Tilt is a revival of the 2013 Fringe hit, a gig theatre biography and tribute act in one.

“My God, I wouldn’t deign to compare myself to Janis in any way,” says Bissett with a laugh. “But I guess there are little parallels in our lives. I needed to fight to be recognised for what I knew myself to be as well, although I had to do it by getting out of a band. I had to learn a whole lot of other skills to tell the stories I wanted to, although music’s never left me. The first show I co-directed at the Arches 17 years ago was called Horses, Horses Coming in All Directions, which is a Patti Smith quote, and we called that gig theatre way back then.”

Although she has no involvement with it this year, Bissett’s also looking forward to Edinburgh International Festival’s revival of David Greig and songwriter Gordon McIntyre’s Edinburgh-set romantic comedy two-hander Midsummer this month, for which her co-starring role won a Stage Award in 2009. “Little bits of me live in that play,” she says, venturing down memory lane once more. “Parts are there to be shared, but that play was written by David over a few years in discussion with us (Bissett and actor Matthew Pidgeon), so it’s very personal. I’ll definitely be going to see it.”