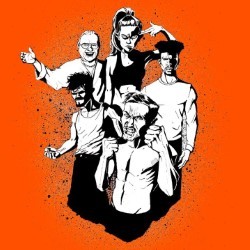 There's a glorious, rolling swagger to Flesh & Bone. Unpolished Theatre’s lyrical ode to the community of a London council estate is blunt, filthy and ingenious.

Writer and director Warren pieces their lives together for us through stage-packed or individual monologues. These are spittle-flecked gobbets of blank verse that shove Shakespeare in between sinewy streams of modern patter. It works beautifully, turning the air blue with its sweary rhythm and pitch. The poetry of it hits like two fingers flicked with a smile.

Warren skilfully uses the confessional nature of the monologue form to peel away his characters’ layers, digging beneath the stereotypes his production initially dares us into believing. In particular, Babalola shines as Jamal, simultaneously funny and sad as he drops the gruffness to confide that he’s a nice guy. He stokes up a fiery fierceness at the sneers of a posh-suited society beyond the estate.

That political edge throbs away beneath cartoon-sized jokes as the cast throw themselves full tilt at the show. Slimy bureaucratic buzzwords for forced relocation like "decant" pop up. While Flesh and Bone’s celebration of family isn’t an exercise in gritty subtlety, it isn’t rose-tinted. Protest is part of the exhilarating dynamo powering this show.