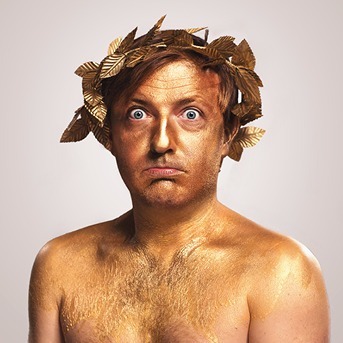 Emerging in overalls splattered in blood, or perhaps just paint, Andrew Maxwell begins reciting the words of Shakespeare, a significant departure for the irreverent Irish stand-up. And it remains one, even as he abruptly dismisses the florid poetry and poise for an earthier, more down-to-earth tone and his usual direct address of an audience. This is the tragedy of Julius Caesar reimagined as a one-bloke monologue by writer Owen McCafferty, beefing Caesar's part up on a par with Brutus' and re-emphasising the importance of the Rome populace.

No Gielgud, Maxwell is visibly working outside his comfort zone, occasionally catching his breath after a particularly demanding scene and routinely stabilising himself by breaking the fourth wall. What he brings is the capacity to stir a crowd to engagement, evoking the fickle mob with rabble-rousing rhetoric to get the Gilded Balloon into character. Comfortable with the low-born and high, he's also adroit at expressing the perverted motivations of powerful men's sly, self-deceiving treachery. His Cassius is an out-an-out scheming rotter, his Caesar a demagogue primadonna. But his Brutus is a believable study in compromised nobility.

Equally, the actor and script retain a significant, ironic distance from Shakespeare, exposition conveyed in the manner of chatty banter down the pub – the tribunes characterised as jobsworth “eejits” for example. Perhaps that's closer to how it might have played out in the Globe. But it's miles away from the stilted Shakespeare of parody and refreshing for it. Whether it'll greatly alter your perception of the play is doubtful but Call Me Caesar is a diverting novelty.