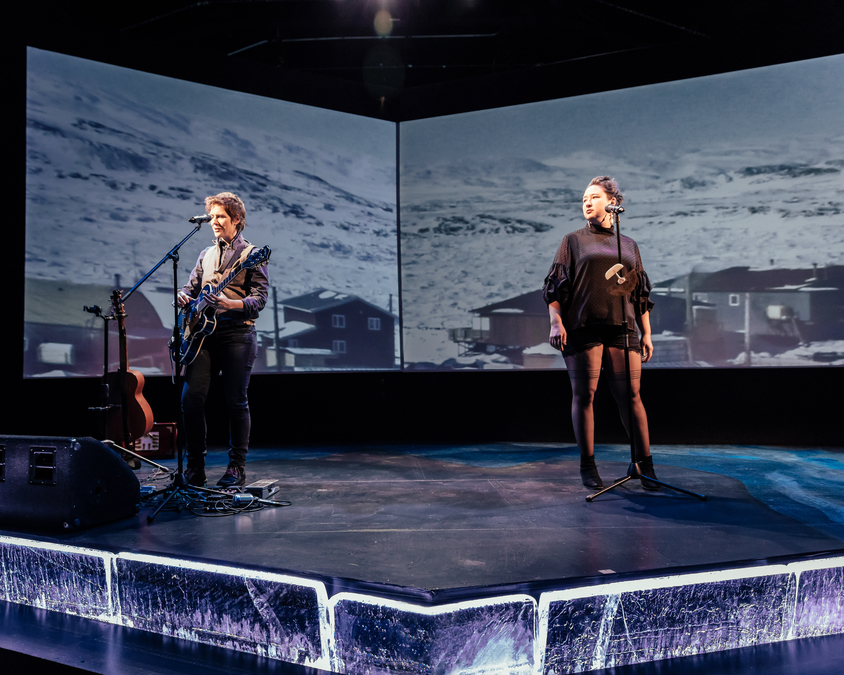 Part of Indigenous Contemporary Scene, a programme of work from Canada taking place across the Edinburgh festivals, Kiinalik: These Sharp Tools is performed on ice. Well, performed with ice, its creators Evalyn Parry and Laakkuluk Williamson Bathory are quick to point out. “We’re not on skates,” Parry deadpans.

The ice melts throughout the show, a potent visual image within a performance described as both a concert and a theatrical dialogue. “It’s a big conversation about everything from colonial history in Canada and climate change to very personal histories, weaving together a big tapestry of ideas,” explains Parry.

Parry is artistic director of Buddies in Bad Times Theatre in Toronto; Bathory is an Inuk artist, living and working in Iqaluit in the north of Canada. Their collaboration began deep in the Arctic – on an educational expedition with teenagers from all over the world, as well as climate scientists and Inuit politicians.

“It was an unbelievably beautiful journey,” recalls Bathory. “But also difficult in many ways, and the beginning of our conversations on stage are the complexity of that journey.”

There was some cognitive dissonance in being on a diesel-fuelled vehicle, and being served five-course meals, while learning about the destruction climate change was causing to the very land they moved through. For Bathory, the contrast between this gilded voyage and the tough reality of Inuit life there was particularly uneasy.

Parry describes it as a “very colonial style of travel”, and Kiinalik explicitly looks at climate change as a form of colonialism. For the Inuit, their landscape is literally being destroyed by it – the permafrost that they live on is melting.

“Climate change, industrialisation and colonisation are all the same thing for us as Inuit,” points out Bathory.

Still, the trip did bring the artists together: “We realised we had kindred spirits”, Bathory recalls. Parry played some of her songs on the trip, while Bathory performed her uaajeerneq – a Greenlandic mask dance, which involves painting the face and expressively distorting it. Both now feature in their show.

The Indigenous Contemporary Scene strand shines a light on communities perhaps little-known in the UK. But how much work by indigenous artists is seen in Canada today? “There’s incredible work made all across the country. But more is still needed to dismantle the systemic racism that the country is based on,” says Bathory.

Parry suggests that, since Canada’s truth and reconciliation report in 2015, there's been greater engagement within mainstream society with “the truth about our history and the colonial system of cultural genocide that had been perpetrated.” But, she adds, it’s still “very much being digested by many people in our settler culture: there’s a lot of learning – and squirming.”