Bang Average's physical comedy is below the waterline 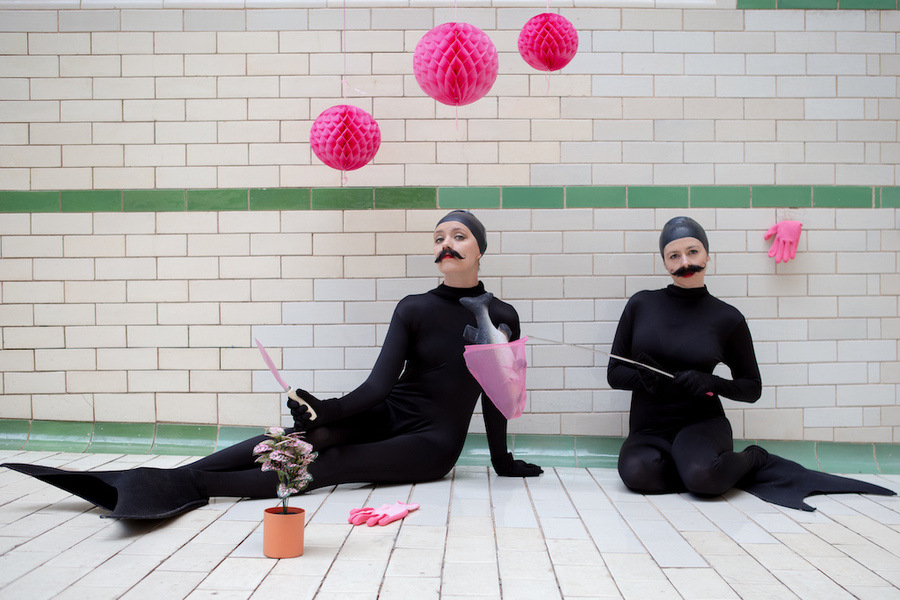 Lucille and Cecilia is the debut show from Bang Average Theatre, a young company formed by Drama Studio London graduates Chloe Darke and Susannah Scott. The hour-long physical comedy was something of a success at last year’s festival, and it returns again this year, but its bizarre blend of anthropomorphic absurdism and surreal slapstick falls distinctly flat second time around.

Darke and Scott turn the Assembly Rooms’ shipping container they are performing in into Bowman’s Circus, and spend the entire hour flopping and flapping around in black morph suits, swim caps and fake moustaches, pretending to be two performing sea lions. It’s not exactly a high-concept show – it basically boils down to a series of seal-related slapstick sketches, loosely linked together by a flimsy narrative about escaping into the great unknown.

Darke is Lucille (Lu-seal, get it?). Susannah is Cecilia (Ce-seal-ia, see?). They throw balls to each other. They fail to balance them on their noses. They do some pretty basic acrobatics. They get scrubbed down by hunky Trevor The Trainer. They spontaneously learn to speak, then plot to see the world outside their enclosure, out there beyond the carpark.

There’s definitely an endearing energy to Darke and Susannah’s double-act as they toy playfully with both each other and the audience. But their show lacks content and wit, and neither of them quite have the charisma or comic chops to pull this style of show off. They flail around, in more ways than one.